Find top rated Northern Arizona Manufactured Homes for active adults considering retiring to Northern Arizona. Searching for Manufactured Homes on Retirenet.com is simple and easy. You will find many communities and homes to fulfill your retirement dreams. All retirement options are available including golf course living, new home communities, waterfront homes, condominiums, villas, manufactured home living and more. Your perfect place to retire is just a few clicks away. 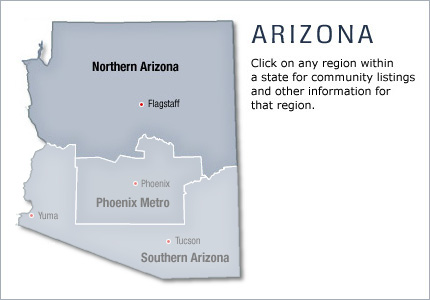 Northern Arizona stands in contrast to the southern part of the state. The high Colorado Plateau, which stretches across large portions of four states, covers almost the entire northern half of Arizona.

It begins at the Mogollon Rim, which runs across the state from northwest to southeast, where the land rises abruptly in a line of ridges and cliffs. Near the Rim, the small city of Flagstaff is surrounded by forested mountains, including Arizona's highest: 12,634-ft. Humphrey's Peak. Flagstaff sits at an elevation of 7,000 feet, and is cooler than Phoenix by about 20°F--making it a popular destination for southern Arizonans in summer.

It sometimes seems as though Northern Arizona consists of an unbroken string of scenic attractions. The biggest--literally--is of course the Grand Canyon, one of the greatest tourist attractions in the country. But the list of others is truly staggering: Meteor Crater, Petrified Forest National Park, Canyon de Chelly National Monument, Lake Mead National Recreational Area, Hoover Dam, Glen Canyon National Recreational Area, and Monument Valley all vie for attention.

Is It Time To Retire?

When you talk about retiring, do you say you plan to retire in five years? Have you been saying this for longer than five years? You’re not alone. One of the primary reasons for keeping retirement a moving target is not knowing when it’s the right time. Read more...

The Top 3 Myths of Financial Planning

Most people who have a 401K or an IRA have little idea of where their money is invested. When you ask them, “Where’s your retirement money?” they reply, “At the bank” or “With my broker.” No wonder so many people are financially unprepared for retirement. Read more...

Situated on Florida's west coast, in the heart of the popular Suncoast, is where you'll find Lake Haven. Residents of this Dunedin, Florida community enjoy the benefits of being within 5 miles of metropolitan Clearwater, and appreciate their close proximi Read more...

Republic front pages from the past 125 years

A look through the Hotel San Carlos with the Melikian family