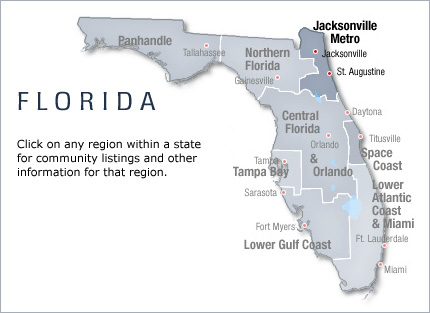 The Upper Atlantic Coast is a region of contrasts: from quiet farming areas along the famous St. Johns River, to thronged oceanside beaches, from historic settlements like St. Augustine to vibrant cities like Jacksonville, the counterpoints seen here make this region almost a microcosm of the state.

The area's chief city, Jacksonville, holds the distinction of being the largest city in the continental United States by area. Not surprisingly, it is also Florida's largest city, though it is often overlooked in favor of its more famous sisters, Miami and Tampa. Yet Jacksonville boasts cultural attractions commensurate with its size, including art and science museums and a symphony orchestra.

South of Jacksonville lies historic St. Augustine, the oldest permanent settlement in North America. St. Augustine has been fortunate to retain much of its original character, and its Old Town district is one of the most popular tourist destinations in the area.

Connecting Jacksonville and St. Augustine, though, and extending both north and south of them, are the true main attractions of this region: the wide, level, palm-shaded beaches that have made Florida legendary as a vacation and retirement destination, and which continue all the way south to Miami and beyond.

Do you recognize this 5-year-old boy?

Jacksonville police need help to find the family of a 5-year-old boy found wandering in Arlington. The boy was found by officers at about 6:30 a.m. Tuesday on Century 21 Drive, according to the Jacks...

Man turns midlife crisis into the opposite, finds joy traveling with 'adventure cat'

Rich East had two big things in his life he had to let go of, but one unexpectedly turned out to be much harder than the other. In 2014, East, like a lot of middle-aged adults, started to execute a c...

Last week, news broke about a movie theater that lets you bring your dog. Now, we're here to tell you about a theater that offers double beds instead of traditional seats. Cinema Pathe, a theater cha...

How prepared are you for hurricane season?

As hurricane season approaches, NOAA is predicting a near-normal season with four to eight hurricanes. The forecast has a majority of people living in Florida worried, according to a recent survey con...

25% of third graders in Duval risk being held back

Vice President Mike Pence paid tribute to fallen members of the U.S. armed forces Monday, thanking their loved ones in a ceremony at Arlington National Cemetery and acknowledging that for them "e...

A group of Florida lawmakers spent part of Monday morning touring a 600-student middle school in the heart of Tel Aviv. What they found was fences, a system of coordinated security and quick response ...

A grieving mother whose 9-year-old son died Thursday night in a tragic accident at a boat ramp in St. Augustine shared stories about Logan Stroud."Anytime somebody was down, all they had to do wa...

Memorial Day weekend and sunny skies brought large crowds to Jacksonville area beaches.Lifeguards in Jacksonville Beach said it's one of their busiest weekends, with an estimated 90,000 beachgoers hit...