Home  »  Articles  »  You Say Neanderthal Like It’s a Bad Thing! 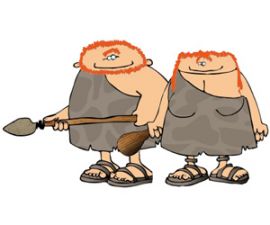 Scientists recently reported that contrary to what was once believed, today’s humans almost all have a little Neanderthal in them. This is, I believe, the reason most of us eventually resort to plucking our eyebrows—we know deep down in our DNA that we won’t look good with a unibrow. (By the way, Word doesn’t think unibrow is a word, but you and I know better.)

These high level genetic studies could have easily been avoided had someone just thought to interview either wives or interior designers. Both know that on that day in the late 1990s when men started insisting on having their own “man caves” (I believe it was a Tuesday around 3 p.m.), there was no longer any doubt that Neanderthal man was alive and well.

But the white-coated guys and gals at Harvard need to put their degrees to good use and prove to themselves that their student loans truly were an investment in their future. So they have analyzed over 6,000 X-chromosomes from all inhabited continents of the world and concluded that early modern man and Neanderthals mixed and mated. It was a lot like an episode of Big Brother, only Neanderthals were better behaved and less likely to wear Speedos.

I used to have a button that read, “Sorry, I only date within my own species.” Apparently, that wasn’t the case 80,000 years ago. I say I used to have that button because like humans of the past, I’ve relaxed my standards too.

How two completely different subspecies got together before the invention of Facebook remains a mystery. They probably didn’t have long conversations deep into the night as they attempted to invent fire so that their ancestors could enjoy candlelit dinners. In fact, most scientists have suggested Neanderthals weren’t the best communicators… sort of like the cast of Jersey Shore. In fact, one of the largest excavations of Neanderthal man was at a La Cotte de St Brelade in Jersey. Sure, the Jersey referred to is off the coast of Normandy, but I think it’s no coincidence. Beliefs about Neanderthal’s poor communication skills have led us to refer to people today who talk using monosyllables and eye rolls as Neanderthals. Or teenagers. Or both.

But one man, Steven Mithen, thinks that perhaps they (Neanderthals, not teenagers) communicated using a musical language he has named, “hmmmmm,” proving that he himself has a strong showing of Neanderthal genes.  A more evolved scientist would have named the language after himself, or at least the girl who refused to go to prom with him in high school. Perhaps Neanderthals were the first to meditate too… it’s not a giant evolutionary leap from “hmmmmm” to “ommmmm.”

In light of these new findings about our ancestors, you may be wondering just how much Neanderthal you have in you. Unfortunately, there isn’t a spit test you can buy at your local pharmacy (although I’m sure it’s coming and will be stocked right between ovulation kits and tests to see what breeds your dog has in his or her mix). But there are some behavioral clues you can use to decide for yourself. You know you have substantial Neanderthal DNA if you get nostalgic when you see ads for “The Club” on late night TV; you prefer not to vacuum your carpets except when company is coming over because a dirt floor feel more “homey”; you draw on the walls of your house with markers; or you have to have any part of your body waxed more than twice a week.

Then there’s this… I just found out that a study in 2007 suggests that Neanderthals tend to be red-haired and have pale skin… just like, uh, me. I guess I won’t be needing that spit test after all. Darn, now I’m going to have to start dying my auburn unibrow!