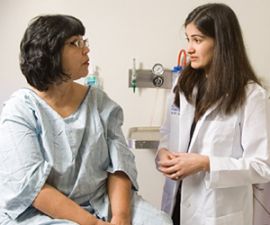 Women are under-represented in clinical cancer research published in high-impact journals, according to a new study by researchers at the University of Michigan Comprehensive Cancer Center.

Taking into account the incidence of particular types of cancer among women, studies included a smaller proportion of women than should be expected. The analysis looked specifically at studies of cancer types that were not gender specific, including colon cancer, oral cancers, lung cancer, brain tumors and lymphomas.

The authors looked at 661 prospective clinical studies with more than 1 million total participants. Results of this study appear online in the journal Cancer and will be published in the July 15 print issue.

"In the vast majority of individual studies we analyzed, fewer women were enrolled than we would expect given the proportion of women diagnosed with the type of cancer being studied. We're seeing it across the board in all cancer types," said study author Reshma Jagsi, M.D., D.Phil., assistant professor of radiation oncology at the U-M Medical School.

"It's so important that women are appropriately represented in research. We know there are biological differences between the sexes, as well as social and cultural differences. Studies need to be able to assess whether there are differences in responses to treatment, for example, between women and men," she added.

The National Institutes of Health's Revitalization Act of 1993 explicitly calls out the importance of including women in clinical research, noting that clinical trials should enroll adequate numbers of women to allow for subgroup analysis.

Traditionally, researchers were told not to include people of vulnerable populations in their studies. This group included women of childbearing age. "By protecting them from research, we're excluding them," Jagsi notes.

Previous studies have found some barriers to clinical trial participation are lack of information, fear and a perception of interfering with personal responsibilities, such as child care.

"Sometimes participating in research studies can be time intensive. Women today are often stretched very thin trying to deal with the balance between domestic responsibilities, their cancer diagnosis, and often a career as well. They may be particularly likely to find clinical trials too burdensome. In that case, researchers should consider providing compensation to help with transportation or child care expenses," Jagsi said.

This under-representation of women is not necessarily the result of conscious decisions, according to senior author Peter Ubel, M.D., director of the Center for Behavioral and Decision Sciences in Medicine at U-M.

"Clinical researchers are not purposely trying to exclude women from their studies. All the more reason they need to consciously and earnestly revise their recruitment methods to give more women a chance to volunteer," Ubel said.

The percent of women was summarized in two ways: The overall percent of women from all studies; and the average percent from each study that were women. The first method gives greater weight to larger studies, while the second method allows each study to have equal weight. Women's representation was lower than expected, based on general population incidence data, according to both analyses.