Will My TV Kill Me? - Retirement Net by Dr. Matthew Edlund, MD, MOH

Will My TV Kill Me?

Contrary to recent reports, it’s not your television that’s dangerous 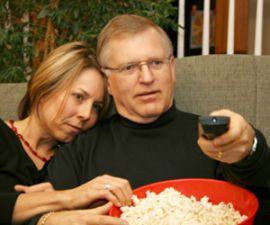 Twenty one point eight minutes of lost life for every hour watched. That’s the precise measurement coming from a widely reported Australian study of watching TV. Based on 11,000 adults, they estimate that Australian males, averaging 2 hours of TV a day, will see their lifespan decrease by 1.8 years, and females by 1.5 years.

In the US, Nielsen surveys show our adult population watching TV a bit more than 4 hours a day. By that reckoning, Americans are averaging 75.5 years, but should be expected to live 78.8 years.

Is watching “Glee,” “Law and Order” and “Monday Night Football” slowly killing you?

Correlation is Not Causality

It’s not just politicians who adore one sentence answers to highly complex questions. My national media experience includes one highly attractive host who quickly laid down the interview rules: “remember, keep it fluffy; one sentence answers; no science.” On another national TV channel, asked how both short and long sleep “caused” higher death rates, I tried to explain that people who sleep abnormally are often sick; my analogy was if 85% of Americans die in bed, that does not mean that beds kill people.

The Australian researchers are well aware of such confusion.

In the abstract, they include the confidence interval of their data—the standard statistically acceptable 95% range of possible answers. This assumes you accept the author’s modeling of the numbers, and that the data follow normal (Gaussian) distributions—two big assumptions. Even with those assumptions, the confidence interval of decreased lifespan varied between 8.4 days and 3.7 years for males, while the CI for females was a shorter lifespan of 6.8 days and 3.1 years. This is rather similar to other studies performed in the US at the Harvard School of Public Health, showing a 13% decrease in lifespan for each two hours per day spent watching TV. As the authors say, “This study is limited by the low precision with which the relationship between TV viewing time and mortality is currently known.”

Folks, there’s a big difference between 8.4 days and 1.8 years of “lost life.” Nevertheless different media outlets were able to state that one hour of TV watching was equivalent to two cigarettes.

But that’s not correct, either.

TV Or Not TV—Is That the Question?

Not really. What matters is what TV watching represents—primarily less physical activity.

Watching TV—especially for many hours—really cuts down on physical activity. People who are watching TV are generally not moving then or other times—either walking or other exercise.

So who does watch a lot of TV? Surprisingly, use of many internet devices is not cutting TV time among teenagers and twenty somethings, who watch TV more than they use the internet (though they often do both.

There are surprisingly few long term studies of how physical and mental illness affect TV watching. However, it’s no surprise that my and other clinicians’ experience is that sick people watch a lot television. Depressed people watch scads of TV. And mentally exhausted “relax” with TV—particularly people who are feeling overworked and unable to pay the bills.

However, it’s not just lack of exercise that correlates with TV watching. There is now data that people who sit a lot also have higher rates of death—even when they are exercising a lot.

Sitting is hazardous to your health.

Is it possible to watch TV without guilt? Even if you only watch science documentaries and the Royal Shakespeare Company, you may experience remorse at lost opportunities to prevent global famine, reengineer the warming planet, or visit your ailing great aunt.

But it is possible to make TV watching an active process which can help regenerate your body. Here are some suggestions:

Don’t worry about “Glee” shortening your lifespan—if you sing and dance along.