Why Move to an Active Retirement Community? - Retirement Net by James Patrick Blake

Home  »  Articles  »  Why Move to an Active Retirement Community?

Why Move to an Active Retirement Community?

A community designed with seniors in mind will probably have more of what they want. 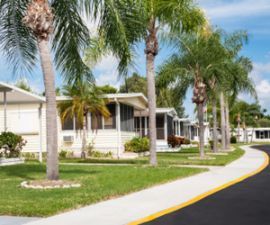 For many on the verge of retirement, the biggest question begins with where—as in, “where should I retire?”

And for an ever-growing number of seniors, the answer to that question is summed up in the phrase “active adult community.” This is typically a community which is age-restricted—usually 55 years or older—and which offers a range of physical and social activities allowing seniors to lead busy, fulfilling lives.

The idea of pulling up stakes and moving into an active retirement community can be daunting. A large percentage of retirees already own their own homes; and many have close ties with family and friends in their communities. But there are a number of factors that argue in favor of moving to a retirement community.

Retirees today typically enjoy better health and longer lives than ever before in history, and it’s the desire to remain active—and the freedom to do so—that has driven the growth of the active retirement community industry. An age-restricted community, composed of like-minded people of roughly the same age demographic, can prove to be more comfortable and more stimulating for retirees. That means not only that you can lead a more interesting life, but also that you may be able to add years onto your lifespan.

Active adult communities are almost always planned from the beginning with seniors in mind. They feature single-level homes with all amenities on one floor—no more climbing stairs up to bedrooms or down to laundry rooms. They boast such features as accessible bathtubs and ADA-compliant door handles become more important with age (and more quickly than some realize). And many, if not most, retirement communities offer living that is totally or nearly maintenance-free—anything from home repair to yard upkeep might be included in the price of the home.

The homes themselves can be much less expensive, and not only because the present housing market is depressed. Buying opportunities are good right now for those with the money; but just as important, retirement homes tend to be smaller than the typical family home—after all, they usually have to accommodate just two people, plus occasional guests, rather than a large, boisterous, and possibly growing family. Trading in a house with more space than you need, for one with just the right amount of room, can not only save you labor but turn a profit as well.

Many seniors, too, have reached the age when they would just as soon be surrounded by like-minded people, with similar experiences and outlooks. A community which is quiet, peaceful, close-knit, and friendly is high on their list of desirable features—and when most people share the same desires, the character of the community usually lives up to them. Retirement communities tend to exhibit exactly the characteristics desired by most of the residents.

But some people enjoy the company of younger people, and are reluctant to take up residence in a community that won’t allow children and/or grandchildren to play active roles in their lives. But for the most part, the idea that 55+ communities are filled with old people who hate children is a myth. While such communities specifically disallow ownership by those younger than the target age, they are usually generous when it comes to residence—some age-restricted communities allow grandchildren to live for as much as 90 days in the community, and nearly all communities have facilities (such as pools) which are open to younger family members.

Those recreational facilities, though, are planned more with the senior community members in mind—and it’s often the facilities and programs that exist in active retirement communities that truly set them apart from ordinary neighborhoods. A typical retirement community will have swimming pools, tennis courts, even a golf course (or two!), and frequently boast an activities director to plan and oversee dinners, dances, excursions, educational programs, and many other opportunities to keep busy, active, and growing long into retirement.

in all, the reasons to live in an active retirement community are many and diverse—as diverse as the millions of people who have chosen to do so.