Why Isn’t He Laughing? - Retirement Net by Leigh Anne Jasheway

Why Isn’t He Laughing?

Men and women are as different in their styles of humor as in everything else. 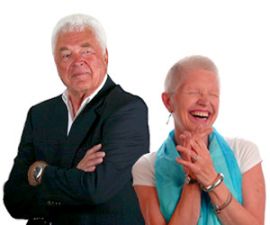 It wouldn’t surprise you would it, if I said that when it comes to what makes us laugh, women and men are different? Good, because throwing my readers into a state of shock isn’t part of the plan.

I’ve been performing comedy and teaching comedy classes for almost seventeen years now (I started in-utero), and I know both from the research I consume like I used to consume chocolate and from my personal experience that there really is a difference in the things each gender finds funny. My first stand-up performance was at a cowboy bar in Houston where the guys in the audience all had gun racks. These days, I much prefer trying to tickle the funny bone of groups of unarmed women and the men they drag into the club with them. I sweat a lot less, which is saying something since the hot flashes are back with a vengeance.

In an interview once, comedian Drew Carey said that if someone falls down on an escalator and farts at the same time, a man will find that extremely funny. A woman, however, will rush up to the person and ask if there is anything she can do to help. Later, however, she might go home and tell it as a funny story to her friends.

Drew’s insight really gets to the core and the differences between male and female humor—men go ahead and laugh at anything they think is funny and don’t have a self-censor that asks questions such as “Did anyone (including the cat, rat, squirrel, etc.) get hurt in the process?” “Will it hurt someone’s feelings if I laugh?” “What if that happened to me?”

That is not to say that women don’t laugh at physical and body function humor, it’s just that our nurturing instinct often tells us to respond differently. Once we’ve moved beyond middle and high school, women’s need to nurture and support makes it more difficult for us to find laughter in things that appear to hurt someone physically or emotionally. Look at America’s Funniest Home Videos. Most of videos feature men doing stupid things, often on purpose. The ones that tickle women’s funny bones most however, seem to be those with babies, children, weddings, or animals (but not the ones where the animals appear to be in peril).

In our everyday lives, we create different types of humor as well. Men’s style of humor tends to focus on jokes (short, often clearly made up concepts along the lines of “Two rabbis and a horse go into a bar), scatological topics (sex and body function), and competition. I performed stand-up for a wedding reception recently and a group of friends of the groom—all male—tried to engage me in a “Let’s see who can be funnier” contest. To me, the funniest part was watching them try to outdo one another.

Typical female humor is more reality-based and story-telling in nature, often coming from true life experiences that are exaggerated for a giggle. We most frequently share these stories with our friends and don’t feel compelled to try to offer up a funnier story every time someone shares hers.

This is a generalization, of course. There are women whose sense of humor is very much like men’s and vice-versa. But the next time a man tells you you don’t have a sense of humor or you wonder what’s so funny when the guys are cracking up, remember, we’re as different with our senses of humor as we are everything else in life.

Leigh Anne Jashaway is a motivational speaker and stand-up comic who speaks at 40-60 conferences and workshops and performs at more than 30 shows a year. To date, more than one-quarter million people have seen her presentations. She has a masters degree in public health, is an expert in stress management, and has 15 published books. Leigh Anne has won numerous writing awards, including the 2003 Erma Bombeck Humor Writing Competition. Her website is AccidentalComic.com.