What Type Of Retirement Community Is Right For You? - Retirement Net by Allen Robie

Home  »  Articles  »  What Type Of Retirement Community Is Right For You?

What Type Of Retirement Community Is Right For You?

Modern communities for retirees come in many different configurations. 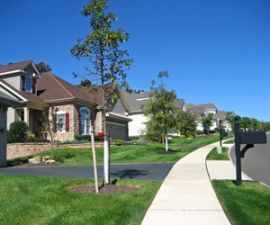 Types of 55 Plus Communities

People today live longer lives than in previous generations. That means there are more retirees than ever before in history, and many of them are choosing to take advantage of a relatively new development: the retirement community. For some, it’s a matter of choice; for others, it’s a necessity based on a need for medical care. There are five basic types of retirement community, defined mostly by the level of independence of their residents: Active Retirement Communities, Independent Living Communities, Assisted Living Communities, Nursing Care Facilities, and Continuing Care Communities.

These communities are simply planned communities that are age-restricted. The cut-off point is generally 55 years of age, and so they are sometimes referred to as “55+” or “55-plus” communities.

They differ widely in type and expense of housing. They may feature, alone or in combination, single-family homes (either site-built or manufactured), condominiums, town homes, or apartments. The homes are usually designed with the needs of aging residents in mind. In keeping with their name, such communities generally cater to an active population by featuring recreational amenities such as golf courses, swimming pools, tennis courts, and more. Many communities also have activities planners on staff. Some communities offer unique amenities depending on location: for instance, if close to a waterway, there may be a marina.

Generally, such communities offer a basic set of services, such as upkeep of lawns and yards. For this, and for the upkeep of common areas, residents will be charged a monthly fee.

These communities occupy the middle ground between Active Retirement Communities and Assisted Living Communities. In an Independent Living Community, residents are not given what is termed “custodial care,” but they can take advantage of a number of services which remove much of the workload of daily life. For that reason, housing is commonly more centered around condominiums and apartments rather than separate homes. Residency, however, is still limited to those seniors who are active and healthy, and able to live without assistance.

Independent Living Communities may offer such services as dining rooms, transportation, and laundry and cleaning services. They generally also offer a great number of amenities to residents, even including restaurants, beauty salons, and movie theaters. In this, they resemble small, self-sufficient villages.

These communities are designed for people who have trouble performing what are called “activities of daily living” (ALFs), such as dressing, bathing, and basic housekeeping. Thus, they provide services which are considered “custodial care.” Residents still are mostly independent: they structure their own days and follow their own schedules, taking advantage of only the assistance that is needed.

Some Assisted Living Communities are based around apartments, allowing residents a greater sense of independence; others are more strongly congregate, with residents having private rooms within a shared facility.

These communities are live-in facilities that are licensed to provide medical care. In addition to providing the same custodial care as Assisted Living Communities, nursing facilities also have licensed nurses and physicians on staff or on call, in addition to other staff such as physical and occupational therapists and nursing assistants. They are the most expensive type of retirement community, providing in essence the same services as convalescent hospitals.

Some nursing facilities specialize in a particular medical segment of the population; the best-known examples are those that specialize in Alzheimer’s care.

These communities—known by their acronym of “CCRCs”—are a unique arrangement encompassing Independent Living, Assisted Living, and Nursing Care within the same community. In general, residents sign a lifetime contract with a community (which are thus sometimes referred to as Life Care communities), and move into the community beginning at the independent living stage. As residents age, they eventually transition into assisted living and finally (if necessary) into nursing care.

The advantage of CCRCs is that they provide a sense of stability and reassurance to a retiree’s life by eliminating the uncertainty that can accompany aging. They also allow “aging in place”: a resident spends his entire retirement, no matter what the stage, within a single community, surrounded by friends and familiarity.

CCRCs, because they include (eventual) medical care, tend also to be among the most expensive retirement options.