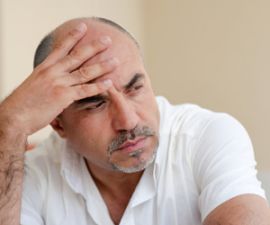 Based on research and feedback involving more than 60,000 men, we have a much better understanding of what is causing Irritable Male Syndrome (IMS). Although triggers vary, man to man, we found that there were four key elements at the core of most men’s problems: hormonal fluctuations, changes in brain chemistry, increasing stress, and loss of male identity and purpose.

Hormones and IMS
In order to understand the way in which hormonal fluctuations cause IMS in men, we need to know something about testosterone. Theresa L. Crenshaw, M.D., author of The Alchemy of Love and Lust, describes testosterone this way: “Testosterone is the young Marlon Brando—sexual, sensual, alluring, dark, with a dangerous undertone.”

Dr. Gerald Lincoln, who coined the term “Irritable Male Syndrome,” found that lowering levels of testosterone in his research animals caused them to become more irritable, biting their cages as well as the researchers who were testing them. Larrian Gillespie, M.D., an expert on male and female hormones says, “Low testosterone is associated with symptoms of Irritable Male Syndrome.”

Brain-Chemistry Changes and IMS
Most people have heard of the brain neurotransmitter, serotonin. When we have enough flowing through our brains, we feel good. When there isn’t enough, we feel bad. Siegfried Meryn, M.D., author of Men’s Health and the Hormone Revolution, calls serotonin “the male hormone of bliss.” Women have the same hormone in their brains and it has an equally positive effect on them. “The more serotonin the body produces,” says Dr. Meryn, “the happier, more positive and more euphoric we are. Low serotonin can contribute to a man’s irritability and aggression.”

One of the most common causes of low serotonin levels is our eating and drinking habits. For instance, research has shown that protein, if consumed in excessive quantity, suppresses central nervous system serotonin levels. Many men were taught to believe that eating lots of meat would make them manly. Not only are hormones injected into meat to make the animals fatter, but the protein contained in the meat can be harmful as well.

Judith Wurtman, Ph.D., and her colleagues at the Massachusetts Institute of Technology found that a high protein, low carbohydrate diet can cause increased irritability in men. They found that men often mistake their cravings for healthy carbohydrates, such as those found in vegetables like potatoes, rice, corn, squash, etc., with cravings for protein found in meat.

“Eating protein when we need carbohydrates,” says Wurtman, “will make us grumpy, irritable, or restless.” Wurtman’s team also found that alcohol consumption increases serotonin levels initially. However, chronic use dramatically lowers serotonin, resulting in depression, carbohydrate cravings, sleep disturbances, and proneness to argumentativeness and irritability. It may be that the male propensity to eat too much meat and drink too much alcohol is contributing to lower serotonin levels in brain chemistry, which leads to symptoms of IMS.

Stress and IMS
We all know the feeling. We’ve had another one of those days at work. One deadline after another, and there isn’t enough time to breathe. Someone is always making more demands, and no matter how hard we try to stay on top of things, we seem to be getting farther and farther behind. Many of us have lost our jobs. If we have a job, we’re often working more hours for less money. The economy is in turmoil. Our savings are dwindling, and our hopes for retirement seem to be fading away. We all recognize the feeling of being stressed out.

In my experience as a psychotherapist, I have found that stress underlies most of the psychological, social, and medical problems that people face in contemporary society, including IMS. For most of us, stress is synonymous with worry. If it is something that makes us worry, then it is stressful. We can’t avoid stress, nor would we want to. Life is change and change is life. The problem arises when there is too much change in too short a time. We might think of the problem that leads to the Irritable Male Syndrome as “dis-stress” or “overstress.” Stress is unavoidable, necessary, invigorating and life-enhancing. Distress and overstress can cause untold difficulties if not understood and prevented.

So, what can we do to relieve the build up of stress? There’s actually a very simple answer. If you think about the kinds of stresses our bodies are designed to meet, they all involve physical activity. When a wild animal came into the camp of our hunter-gatherer ancestors, we either fought or ran away. In either case, we utilized a lot of physical energy.

It’s physical activity that allows the body to attend to the stress and then to return to normal. In our modern world, we usually don’t have wild animals bursting into our living rooms. The stresses are more psychological than physical. Yet the reaction is the same. Our bodies release stress hormones that can only be dissipated through physical activity. So, if you build up stress every day, you must do something physical every day. Walk, run, take an aerobics class. As the saying goes, “just do it.” You’ll feel better and it’s a sure-fire way to treat IMS.

Loss of Male Identity and Purpose and IMS
For most of human history, the male role was clear. Our main job was to “bring home the bacon.” We hunted for our food and shared what we killed with family and tribe. Everyone had a role to play. Some were good at tracking animals. Others excelled at making bows and arrows or spears. Some men were strong and could shoot an arrow with enough force to kill a buffalo. Others were skilled at singing songs and doing dances that invoked the spirit of the animal and made the hunt more effective.

But now many of us work at jobs that we hate, producing goods or services that have no real value to the community. We’ve gotten farther and farther away from the basics of bringing home food we’ve hunted or grown by ourselves. The money we receive is small compensation for doing work that is meaningless. And the men with some kind of job, no matter how bad, are the lucky ones. More and more men are losing their jobs and can’t easily find new ones.

In her book, Stiffed: The Betrayal of the American Man, author Susan Faludi concludes that male stress, shame, depression, and violence are not just a problem of individual men, but a product of the social betrayal that men feel as a result of the changing economic situation we all face. One of the men Faludi talked to at length, Don Motta, could be speaking for millions of men in this country who have been laid off, been downsized, or part of a company that has gone under.

“There is no way you can feel like a man,” says Motta. “You can’t. It’s the fact that I’m not capable of supporting my family… When you’ve been very successful in buying a house, a car, and could pay for your daughter to go to college, though she didn’t want to, you have a sense of success and people see it. I haven’t been able to support my daughter. I haven’t been able to support my wife. I’ll be very frank with you,” he said slowly, placing every word down as if each were an increasingly heavy weight. “I. Feel. I’ve. Been. Castrated.”

As Faludi interviewed men all across the country, she uncovered a fact that most men and women know all too well. Men put a lot of their identity and sense of self-worth into their jobs. If we aren’t working or can’t support our family, we feel that we’re not really men. Motta’s feeling of being castrated, speaks volumes. Even men who choose to retire, often feel lost and inadequate. We need to help men know that there is more to who they are than a paycheck. But we also have to develop societies that create meaningful work that can provide a decent living.

All Four Are Related
Any one of the four causes mentioned above could have a major impact on a man and contribute to IMS. But what makes it even more difficult is that they interact with each other. When a man doesn’t feel he has meaningful work, for instance, his stress levels go up and his testosterone levels go down. When men are stressed they often drink too much, which lowers their testosterone as well as their serotonin levels.

The good news is that by changing any one, we can impact all of them. Here are a few things a man can do now. Have his hormone levels checked. Find out if his testosterone is low. Eat healthy food with a balance of carbohydrates, fats, and proteins. Exercise every day. Look for work that is meaningful, and he should not take it personally if our dysfunctional economy pushes him out of his job. He should grow something he can eat, even it’s just a carrot or potato.

Write down the ways in which your man's hormonal fluctuations, biochemical changes, increasing stress, and loss of male identity and purpose may be impacting you. How are they impacting the man in your life? Resist the temptation to immediately go and tell him what to do. Rather, listen deeply. Put yourself in his shoes. Get in touch with his feelings and his needs. It takes time to deal with these issues. Be patient. Be kind.

Jed Diamond, Ph.D. has been a marriage and family counselor for the last 45 years. He is the author of 8 books, including Looking for Love in All the Wrong Places, Male Menopause, The Irritable Male Syndrome, and Mr. Mean: Saving Your Relationship from the Irritable Male Syndrome (May, 2010). He offers counseling to men, women, and couples in his office in California or by phone with people throughout the U.S. and around the world. To receive a Free E-book on Men’s Health and a free subscription to Jed’s e-newsletter, visit MenAlive.com. If you are looking for an expert counselor to help with relationship issues, write to him at Jed@MenAlive.com. 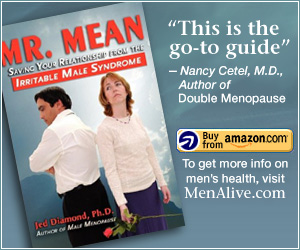