Home  »  Articles  »  Walking Away From Alzheimer’s

Walking Away From Alzheimer’s

A natural human activity can help keep dementia at bay. 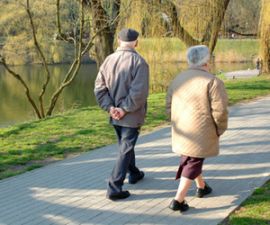 Can we personally avoid Alzheimer’s? Many books have been written on the subject, with suggestions varying from coffee to apple juice to flossing your teeth. Yet one of the most effective strategies may be to take a walk—preferably every day.

How much did they move? About 6-9 miles a week—effectively a mile a day. Not all in one trip, either. Steady as she goes works seems to work fine.

Alzheimer’s is supposed to start early, often taking decades to develop. More and more biomarkers are becoming developed that look at early chemical changes in spinal cord fluid, changing the way clinicians view the disease. So it’s remarkable that even in your seventies, walking can do so much to prevent Alzheimer’s.

But walking can do a lot at any age. It can:

And even one mile a day can help prevent Alzheimer’s. That’s just one more reason to take a stroll.