The Tragedy of Grey Divorce - Retirement Net by Shela Dean

The Tragedy of Grey Divorce

Think splitting up will open the door to fulfillment? Think again. 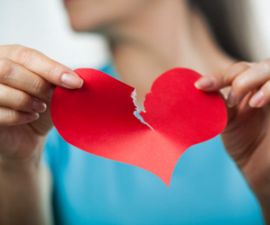 The Baby Boom Generation has the highest percentage of divorce of any demographic, so much so that the term “Grey Divorce” has been coined to describe the phenomena. There are, of course, many reasons for divorce. When it comes to Boomers, however, for many couples who once described their marriage as “good enough,” good enough just isn’t good enough anymore. Boomers say they want more space to find personal fulfillment. Many think they can only have that space either alone or with a new spouse. Statistics say otherwise.

One would think that getting out of an unhappy marriage would make you happy. But, that’s not what a 2002 study by the Institute for American Values showed. In fact, it was just the opposite! Divorce not only doesn’t typically make one happy, but surprisingly, 66% of unhappily married adults who avoided divorce were happily married five years later. This was true even when the marriage had serious problems. Only 20% had divorced and happily remarried in the same time period. According to this study, you’re more likely to end up happily married to the spouse you have than if you divorce. Another study, this one done by AARP, found that most people described divorce as “more emotionally devastating than losing a job, about equal to experiencing a major illness, and somewhat less devastating than a spouse’s death.”

The tragedy of Grey Divorce is that it’s so often based upon a false presumption. Forget for the moment that you’re married and have all the space, freedom, and ability to pursue endless choices that you want. What would you do? Would you travel to Patagonia, learn calligraphy, take clarinet lessons, trek in Nepal, get a college degree, or get a job? Many people fail to tackle their bucket list because their spouse won’t go or objects. But that’s just an excuse. And if you don’t agree, ask yourself what’s stopping you from doing everything on your list? If, for example, trekking in Nepal is a dream, what’s stopping you? If it’s cost, why can’t you earn the money to go? If your spouse won’t go with you, what’s to stop you from going alone or with a friend? Finally, ask yourself if your explanation for why you haven’t or can’t (and be honest!) is a reason or an excuse.

A reason is an objective explanation for why something is the way it is. An excuse is an explanation that involves blaming someone or something else. If the country of Nepal were closed to tourism, you would have a reason why you cannot trek there. If, on the other hand, your explanation is that your spouse won’t let you or can’t get along without you, that’s just an excuse.

Your spouse provides a ready and convenient excuse for why your life isn’t working and you can’t do the things that would bring personal fulfillment. When you can’t blame your spouse, the real reasons you’re not doing everything on your list become more apparent. By going through the “excuse or reason” exercise, you’ll discover that the only thing stopping you from personal fulfillment is you.

It’s easier to blame someone or something else than to take personal responsibility. When, however, you stop blaming your spouse (or others) and your marriage (or other circumstances), you free yourself to find personal fulfillment whether married or divorced.

It’s a tragedy when marriages of many years end for the wrong reason. Sure, there are times when divorce is the right answer. Too often, however, Boomers find that divorce doesn’t bring them happiness. What brings happiness, married or not, is personal fulfillment. Start crossing things off your bucket list today!

Shela Dean is a nationally recognized Relationship Coach, bestselling author, speaker, and the creator of her trademarked ReDate Your Mate program designed to help all couples, regardless of the state or stage of their relationship, regain their Relationship Mojo by bringing the best of dating into their marriage. Shela helps couples have more intimacy in all areas of their life. She has an uncanny ability to make complex concepts easy to understand and even easier to apply to everyday life, and a unique blend of humor, insight, and practical meat-and-potatoes approach capped with a “cut to the chase” energy that makes it fun to embark on a self-improvement course. 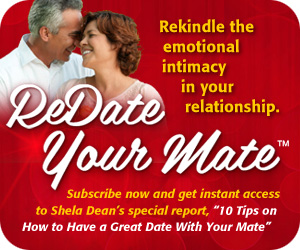