The Spice of Life - Retirement Net by

The Spice of Life

Can a simple change in diet be one of the best ways to stave off the threat of Alzheimer's disease? 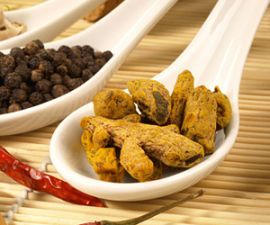 Every year, nearly a half million Americans are diagnosed with Alzheimer's disease. It is one of the cruelest of diseases, robbing its victims of their memories, their minds, their identities, before finally killing them. Each diagnosis is essentially a death sentence: unlike other killers such as cancer or heart disease, Alzheimer's has no known cure, and the few officially-sanctioned treatments consist largely of giving mood-altering drugs—antidepressants, antipsychotics, tranquilyzers—and carefully creating environments that lessen physical risks to both patients and caregivers. Maintain a steady air temperature. Install safety locks. Remove guns.

Alzheimer's costs the country almost $150 billion every year in direct and indirect costs; and the average medical spending for Alzheimer's patients is three times that of seniors without dementia. It robs families of their loved ones, and too often drives them into poverty first. It's no wonder that a diagnosis of Alzheimer's disease is one of the most dreaded.

And that makes it all the more incredible that this implacable enemy might be defeated by the simple expedient of altering a dinner menu. But recent studies strongly suggest that the use of turmeric—the main ingredient in commercial curry powder—not only may protect the elderly from Alzheimer's, but actually does.

The symptoms of Alzheimer's disease are caused by physical changes in the structure of the brain. First, a protein fragment known as beta-amyloid builds up the brain—no one knows why—forming dense plaques around and between neurons. In addition, beta-amyloid is implicated in causing damage to another protein known as tau, resulting in twisted fibers, known as "tangles," inside neurons.

Because the buildup of amyloid plaques is basically an inflammatory response, researchers have tried using non-steroidal anti-inflammatory drugs (NSAIDs) such as aspirin and ibuprofen to prevent or reverse the formation of plaques, but without success. The drugs do seem to dramatically reduce the likelihood of developing Alzheimers—but at the cost of a dramatically increased likelihood of developing stomach ulcers or problems of the liver or kidneys.

Because Alzheimer's is also associated with severe oxidative damage, the next thing was to try a potent but well-tolerated antioxidant, vitamin E. A large federally-funded study found there was some effect, but not much: vitamin E could slightly delay the disabling symptoms of Alzheimer's, but it couldn't stop them—let alone reverse the damage.

But there are other known antioxidants even more potent than vitamin E; and one of them is also a potent anti-inflammatory. It's curcumin, the main active ingredient in turmeric. (It sounds as though it ought to be the main ingredient in cumin, but that is actually made from the seeds of a plant in the parsley family.) Turmeric is a powder made from the dried roots of a member of the ginger family, Curcuma longa. It has long been used not only as a spice, but also as a medicine in its native India, where it has been used as everything from an antiseptic to a beauty aid. Modern studies have demonstrated turmeric's promise as a treatment for such diverse diseases as rheumatoid arthritis, diabetes, cystic fibrosis, and cancer.

Researchers were also intrigued by the fact that rural India has probably the lowest rate of Alzheimer's disease known—about four times less than in the United States. Knowing the properties of curcumin, they wondered: could it be the effect of a diet high in turmeric that was protecting elderly Indians?

In 2001, researchers at the University of California at Los Angeles performed experiments on transgenic mice—mice that had been bred specifically to be predisposed to develop Alheimer's-like symptoms. The experiment demonstrated that curcumin reduced the amount of plaques in the brain. The mice treated with curcumin also performed substantially better in memory-dependent maze tests

Since then, other studies have confirmed the promise of turmeric. One in-vitro human study in 2007 showed that the presence of curcumin substantially improved the performance of immune cells known as macrophages in eliminating beta-amyloid from the bloodstream.

But developing an effective treatment using turmeric is another matter. The problem is that curcumin is actually rapidly metabolized in the body, so it's not very effective when taken internally as a medicine (its "bioavailability" is low). But another study demonstrated that using it in combination with piperine can increase its effectiveness by as much as 2000%. And piperine is none other than the main principle in black pepper—another major ingredient in curry powder.

However, according to one Alzheimer's researcher, UCLA's Sally Frautschy, researchers are having trouble securing funding for more studies on the effectiveness of turmeric. Until we know more, the best thing to do may be simply to increase the dietary intake of turmeric by using it in traditional foods such as Indian curries.