The quick and the dead - Retirement Net by Dr. Matthew Edlund, MD, MOH

The quick and the dead

How fast you move may help determine how long you live. 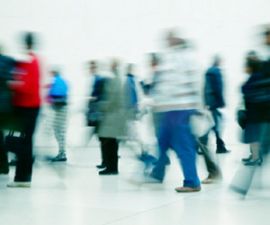 The term “the quick and the dead”—the difference between those still on the earth and those who have left—may derive from the sixteenth century Book of Common Prayer. Its sentiments still holds true.

Humans have evolved to walk. We walk across mountains, deserts, high plains and shopping malls. And the faster we walk, the longer we appear to survive.

How fast does it take to outpace the grim reaper? Australian researchers have a number—3 miles per hour. And they have the data.

But moving affects more than survival. It also affects the brain—and how well it works.

From Australia to France to Boston to…

There’s a lot of data there that physical activity is useful to your health. The main issue is how useful:

• In Australian, 1700 older men were studied with stopwatches—how fast did they walk over a distance of 20 feet? The faster they went, the less they died - on five year followup.

• In France, a study done in Dijon pooled data on thousands of men and women over 65. The quickest third died of cardiovascular disease at only one third the rate of the bottom quartile.

• A pooled international study of 34,000 post 65 year olds—published in JAMA in 2009 showed an increased survival—the faster people moved—across the board.

The faster you move, the longer you last—and the better your brain. But is this cause or effect?

Speed of ambulation in some ways can act as a pretty good marker of overall health. Sick people can’t move fast. People who eventually get sick may also not move so fast—even if at the time of study they appear asymptomatic. So there’s no immediate proof that moving faster by itself will cause better health outcomes.

Use it or lose it seems to be a pretty good guideline in terms of cardiovascular disease—still the largest killer worldwide, though cancer is nipping at its heels. Athletes don’t die that much from heart disease. People who walk a lot have less heart attacks and strokes.

People who walk even twenty minutes a day grow new brain cells—though most of the growth occurs in sleep.

What happens when you walk? A lot.

That means massively increased information flow into your body—most of it unconscious. All that information coming in can make yours systems work better and more efficiently, including:

How Fast is Fast Enough?

It may not matter how fast you move as long as:

Most Americans don’t move much. The vast majority of us spend a lot of time sitting. The more we sit, the faster we die.

And when we do move? Many of us will not walk very quickly. In part, that’s because everyone has their own speed. Old folks move a lot slower than young folks—ask any grandparent. Most of us slow with age—though the big fall off may not occur until we’re well past sixty.

And when walking with others, we usually adjust to the natural pace of the people we’re walking with. We are social animals, after all.

But though each of us will have our own pace, we often have many opportunities to move. We can pace back and forth on a telephone call. We can walk to kitchen and garage and living room—at whatever speed we want.

We can go from the car to the office, or the train to the workplace, or the parking lot to the sports stadium, at pretty much any pace—unless there’s a crowd around us. And there’s usually nobody around who says we can’t walk more quickly.

So forget about those old signs—walk, don’t run. It’s okay to run some times. Or just take a brisk walk. It feels good. It may even temporarily outpace the grim reaper.