The Power of Maybe - Retirement Net by Leigh Anne Jasheway

The Power of Maybe 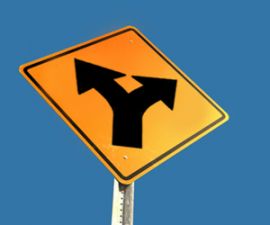 There is power in “No.” No, I can’t bake 400 brownies for the class bake sale tomorrow. No, I won’t be able to stay late after work again because the computer ate that file. No, I’d prefer not to talk to you about changing my cell phone plan. There is also power in “Yes.” Yes, I would like to try that new chocolate dessert. Yes, I will marry you. Yes, I am game for boarding this spaceship, but only if you return me to Earth in time for dinner because I’m expecting a phone call about changing my cell phone plan.

But what about “Maybe”? Is there power in “Maybe.” Yes!

Our society has become so polarized, we’re like two ends of a giant magnet, repelling each other, never able to come together, even momentarily, because we’re so highly charged about so many things. You’re either on one side or the other when it comes to the deficit or health care or tax breaks for the wealthy or the definition of marriage or whether kids should be offered healthy foods in school cafeterias or allowed to eat whatever they want…

I’m not suggesting we be wishy-washy about the issues that speak directly to our core values. Or that we have such an open mind our brains fall out. But what about embracing the power of “Maybe” in the smaller moments of our everyday lives?

Maybe that guy with the scowling dragon tattoo on the back of his neck isn’t a thug or a slacker. Maybe he’s just a young man looking for love like the rest of us.

Maybe that woman who just swerved into our lane isn’t an idiot driver, but an overworked mom whose infant daughter’s screaming distracted her from making the best driving choice.

Maybe that person working in customer service really is trying his best to answer your questions, if you would only stop yelling for a second.

Maybe your neighbor is struggling with loneliness and would love it if someone, anyone, would knock on her front door.

Maybe we don’t need to worry about whether we look good in a bathing suit or have the same amount of hair we did last decade or don’t have eyelashes that can bat away airplanes in an emergency. Maybe as long as we’re healthy and happy and doing the best we can, we’re okay just the way we are.

“Maybe” leaves a door open. Rather than being noncommittal, it suggests taking time before jumping to conclusions, grabbing onto stereotypes, or making up stories that are completely false and serve only to make us angry and frustrated. “Maybe” suggests the possibility of doors being opened, of relationships strengthening, and of each of us optimistically entertaining the idea that people are more alike than different.

This May, why not celebrate the power of “Maybe” by sprinkling some into your life and seeing what grows.