These powerhouses have a huge impact on our health. Find out how to keep them humming. 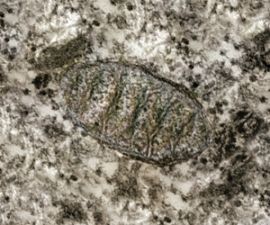 Do you remember way back in high school Biology when we learned that mitochondria were nicknamed the "powerhouses of the cell?" We may have memorized that for a quiz or test, but this organelle is vital to our health, and is thought to play a vital role in aging.

Mitochondria turn food into energy through a series of complex chemical reactions. And, although we learned that DNA is found in the nucleus of the cell, mitochondria have their own DNA, which is passed from the mother to the child. There are somewhere between several to 2,000 mitochondria per cell (some types of body cells don't have any), and in energy-intense cells, such as muscle and heart (which of course is also a muscle) mitochondria make up around half of the cell's volume. Research is revealing that it might be damage to our mitochondria that contribute to aging—a lifetime of insults to our mitochondria through free-radical damage can cause disease, and cause a slow-down in our body's processes.

So, is there a way to protect, restore, or increase these mighty but misunderstood tubular structures called mitochondria? Research suggests the answer is yes—through exercise. Exercising 15—20 minutes a day, three or four times a week (swimming, tennis, biking, brisk walking) can actually increase the number of mitochondria per cell in about six weeks, and make them more effective at burning fat. How will you know it's working? You will feel more energized, and have more stamina.

But, in order to maintain this benefit, you need to keep up the exercise regimen…as we know, use it or lose it! Strength training is also effective for increasing the number of mitochondria for inactive older adults, although the same effect hasn't been observed among younger people. Another fascinating study showed that with regular exercise, our mitochondria helped to lower the risk of insulin resistance, thus helping to prevent, or at least slow down, diabetes. More reasons to get/keep moving!