Text or phone? Which is healthier?

What forms of communication work best for health? 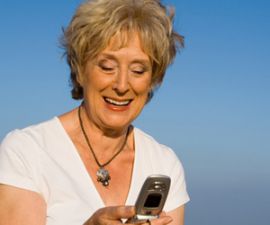 Social communication can be very healthy for you. The data on social support range back to Berkman and Syme’s classic Alameda County Study of 1979—generally the more social contacts you have, the longer you’ll live. The decrease in cardiovascular disease and depression via increasing social contacts was striking in that study and many others that have followed. People have been trying to figure out how social connectedness aids health ever since.

Yet the biological results of these investigations are still rather sparse. Cortisol seems to play a role, as does oxytocin. Meaning matters—the nature of the tie appears particularly important to short term biomarkers associated with health. Yet what forms of social communication work best for health?

The Generational Divide
Silicon Valley is not impressed by telephones. As reported in the Economist, some tech entrepreneurs proudly proclaim they never use smartphones to phone anybody. One of my patients was told by her eight-year-old granddaughter, “Email is so over. Everyone texts.” Landlines are used less and less except by the older generation, or those who fear outages from hurricanes and other disasters.

Yet people usually adopt new technologies without shedding old ones. TV use continues to go up as internet use increases. But different forms of communication convey different types of meaning.

The Many Levels of Communication
Cisco and many other companies are betting large scale video conferencing will increasingly replace face to face meetings. Such technologies can appear far cheaper, when the costs and times of flights, security, and meeting transportation venues are calculated.

Yet people like to see each other face to face.

We learn a lot that way. A large part of human cortex is involved in facial and auditory recognition. As many have declared, “you say a lot even without words.”

Paul Ekman and others have demonstrated the innumerable meanings attached to small alterations in the human face. Then there are all the meanings attached to speech; all the gestures of the body; clothing; smell; pheromones and numerous other communication factors that lie outside our verbal, declarative memory. We know for example that smell preferences for attractiveness tracks dissimilarity of immune-recognition genes—it’s perhaps better to mate outside your immediate gene pool. Recent studies demonstrate pheromones in human female tears that decrease male testosterone levels.

Psychiatrists name part of these face to face communications as “relatedness”—what is the animal feel this person human gives you? What do they sound like? Feel like? Who do they remind you of? Do they give you a sense of trust and reliability, or make you feel like you’re talking to a faker, or even an automaton?

All communication devices have their own form of relatedness—dense or spare. Thus each should have different value as social communications impacting health.

Texting
Texting is spare. Information in the form of words or half words is all you get. Yet nuance, as well as intense irony, is very possible. In Japan, text novels are popular—perhaps in part because so much is conveyed through kanji, so different in its cortical effects from alphabetic scripts.

Still, many complain of a sense of distancing when dealing with text messages. As with the original Turing test, they’re not always sure that what they’ve received was generated by machine or human. The overall social meaning and relatedness is thereby less.

Phones
The human voice is more than a musical instrument; it is a great denoter of individuality. People may not recognize your face, but they remember your voice. We are often greatly entertained in our popular and “high” arts by the human voice—alone.

Cell phones and landline phones provide more than voice communications. Often you can “hear” the environment someone is calling from, which provides both authenticity and context. No wonder my friend is screaming at me—she’s calling from the subway (and her calls all get dropped)! The density of phrasing and the meanings between the words, particularly of silences, is powerful in a phone call.

The result is a notably dense form of social communication.

Social Rest and Social Support
People will continue to communicate in myriad ways. Texting is presently on the rise. The videophone has not taken off, but Skype has. Future variants of videophones may reverse the trend. New technologies will come that will replace the old.

Yet there’s still a lot to be said for the “old-fashioned” phone call. It provides more information than text or email, particularly information regarding emotion, emphasis, and concern. Social support is a critical part of human survival. The more connections we have, especially ones we consider meaningful, the longer we tend to last.

So don’t give up on the phone, even the antediluvian simultaneous voice part. The types of social connections it provides are dense and often long lasting. Ironically, we often are able to provide meanings and contexts through a phone call that we later have trouble characterizing in speech or text. Sometimes it’s really a good idea to call home and just talk.