Ten Scenic Drives Sure To Leave You Breathless - Retirement Net by

Home  »  Articles  »  Ten Scenic Drives Sure To Leave You Breathless

Ten Scenic Drives Sure To Leave You Breathless

Hitting the road can sometimes be the entire point of a vacation. 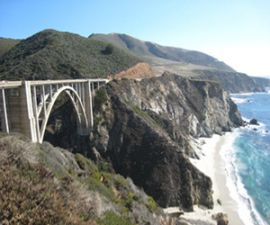 With more than 100 scenic byways throughout America, there is plenty to see and do on the road no matter the time of year. So, as the seasons roll by, jump in the car and take in fall’s vibrant leaves, winter’s snowy wonderland, spring’s wildflowers and summer’s long hours of light.

State Route A1A (Fla.)
The historic Florida A1A byway runs almost the length of the eastern coast of Florida from Amelia Island at the Georgia state line to Key West. Along this route you’ll pass through seemingly endless beachfront towns, including St. Augustine, which is the oldest continually occupied European settlement in the United States, Cocoa Beach, which was the site of NASA shuttle launches, and Miami’s famous South Beach.

Natchez Trace Parkway (Tenn., Ala., Miss.)
The Natchez Trace Parkway was long ago created by Native Americans and was later used as a link between the Mississippi Territory and what is now Nashville. With a little more than 440 miles to explore, there are plenty of hiking and biking trails to be found. Camping is a budget-friendly option for a multiday trip, too.

Talimena Scenic Drive (Ark., Okla.)
The 54-mile Talimena Scenic Drive takes you through Arkansas and Oklahoma. You’ll drive along some of the highest ridges between the Appalachian Mountains and the Rocky Mountains in the Winding Stair and Rich mountains. This area experiences four distinct seasons and can be a great spot to see wildlife such as black bears.

Sky Island Scenic Byway (Ariz.)
Just 27 miles long, the Sky Island Scenic Byway is literally a climb from desert to forest. Take a photo of a cactus at the beginning of your drive, and then, 9,000 feet up, take a photo of yourself in the forest. This route is one of the only paved roads to the top of Mt. Lemmon. Enjoy this area for hiking, backpacking and even skiing.

Top of the Rockies (Colo.)
Feel like you’re on top of the world as you drive the Top of the Rockies Scenic Byway. At 10,424 feet, the Tennessee Pass is breathtaking. Plenty of wildlife can be seen along this 75-mile stretch before you wind up in the old mining town of Leadville, which is an outdoor enthusiast’s dream.

Beartooth Scenic Byway (Mont., Wyo.)
Providing a path to the northeast entrance of Yellowstone National Park, Beartooth Scenic Byway in Montana and Wyoming reaches some of the highest heights in the northern Rockies. In fewer than 54 miles you’ll see snowcapped peaks, lakes and even glaciers. Plan ahead; this road is only open weather permitting, so check with the DOT before heading out on your trip.

Seward Highway (Alaska)
This 125-mile highway links the Alaskan cities of Seward and Anchorage. Starting at the Gulf of Alaska and winding through scenic areas like Chugach National Forest, this road trip is probably a once-in-a-lifetime experience. This highway gives visitors a way to see both the water and interior of southern Alaska.

Highway 101/California State Route 1 (Calif., Ore., Wash.)
Both Highway 101 and California State Route 1 run north-south along the California, Oregon and Washington coastline. These routes are also known as the Pacific Coast Scenic Byway, Pacific Highway and the Oregon Coast Highway. Start in southern California, and when Hwy 101 branches off inland, take SR 1 along the magnificent California coastline. Plenty of views of both the coast and forests, like Redwood National Forest, will be captured.