Home  »  Articles  »  Surviving With Nothing—Lessons From Bears and Men

Surviving With Nothing—Lessons From Bears and Men

Successfully recycling ourselves is one of the keys to longevity and health. 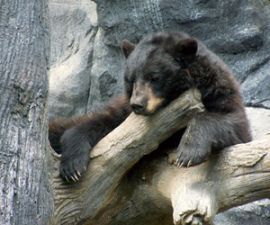 How important is recycling to regenerating your body? Critical.

We use up a lot of “stuff” getting through the day—proteins, sugars, fats, DNA—and much else. Fortunately we get to remake it constantly—and remake ourselves continually as we go. And some animals—like bears—can survive by recycling almost everything they’ve got.

Maybe humans can do something like that too—as happened to a man trapped in a snowdrift in Sweden.

Can 1000 black bears be wrong? The group has been studied out of Wyoming and Montana over the past 25 years. Here are some interesting facts:

How Is It Done?

Recycling. The stuff that’s there keeps getting used. Research on caloric restriction—which massively increases lifespan in many animals—shows marked increases in cellular recycling when animals get two-thirds of their average caloric intake.

For half of their lives, black bears are getting no food intake—zero—and yet heal well and do not lose muscle or bone.

The Strange Snowy Case of Vaserbotten

Recently, Swedish police reported a strange story. A group of snowmobilers had come across a vehicle trapped below a snowdrift. They suspected it was a derelict car, about a kilometer from the main road.

Except there was a man inside. And he was alive.

When they got him out, it appeared he had been inside the car for two months. His only food intake was snow. He had not had the strength to get out of the vehicle.

The man was in rough shape for quite a while. Police, however, were able to corroborate much of his story. It did look like he had survived on snow alone for two months. One of his doctors explained that the low temperatures—well below freezing that winter—might have led his body into a state like hibernation.

Humans are not bears. We do not curl up in tree trunks for six months of the year. Yet surprisingly, we may have biological mechanisms similar to bears.

Only recently was it discovered that adult humans also possessed brown fat, like bears. Even more recently it was found that exercise could cause us to change white fat to brown. How do we do it? We exercise. And exercise has the same effect as caloric restriction on cellular recycling—it increases it.

Human recycling capacities appear to be powerful. Though we cannot survive through hibernation, we have a great ability to recycle what’s already inside us.

Because we have to. Throughout much of human history, chronic intermittent starvation was the norm. And life is fast. We use up a lot of material. And as that material is used up, it’s destroyed, recycled, and remade into something else.

Cellular regeneration is highly efficient. And it’s efficiency can be increased by what we do—particularly how we move, rest, and eat. We can remake our bodies into leaner, more effective organisms—if we do what our bodies are built to do.

And we know a lot about how to do that.