We're no longer kids, but that’s no reason not to act like one. 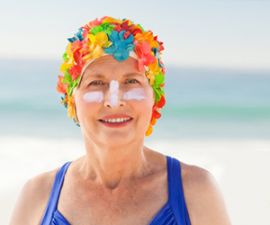 “Summer vacation!” Are there any two words in the English language that bring more joy to children and inner children alike? Sure “Free candy” and “Puppies here!” come close, but looking forward to long sunny days spent doing next to nothing is about as close to nirvana as life gets.

It’s been years (okay, let’s be truthful here, it’s been decades) since I had an entire summer free to do whatever I chose. Still something deep inside me expects that all the joys of a childhood summer are going to be mine to indulge in once again. My inner child gets restless, and I don’t think it’s just because she’s had too much coffee and chocolate.

As soon as the days warm up, I want to put on a bathing suit and run through the sprinkler on the front lawn. Sure the neighbors would laugh at me out there in my tummy control Hello Kitty swimsuit and four layers of zinc oxide on all my exposed body parts, but someone’s got to keep the cul-de-sac entertained. And I’m just the girl for the job.

I don’t want to stop with the sprinkler, though. I want to hurl my body down a Slip-n-Slide with all the other kids. I resist only because I don’t have the type of insurance that would cover the broken bones and bruised organs I’m sure I’d suffer as a result. And I’m fairly certain “acting immaturely” is considered a pre-existing condition.

I want to hang upside down by my knees from a giant oak tree too. Unfortunately, the last time I tried it a few summers ago, I learned the hard way that getting up is much easier than getting down. I was stuck on that branch for seven or eight minutes as I tried to figure out how to gracefully extricate myself from my bat-like position without suffering permanent head injury. Finally a 5-year-old took mercy on me and explained the process.

And of course I want to chase down the ice cream truck and buy five popsicles with my babysitting money and eat them all before they can melt. Nothing says summer better than blue lips and brain freeze. (By the way, wouldn’t Blue Lips and Brain Freeze make a great name for a Jimmy Buffet cover band?)

I was a nerdy girl who loved going to school, but even I knew there were some things you could only learn during summer vacation—like how to water ski. Despite being legally blind without my glasses and getting entangled in a fishing line and almost hitting the side of a bridge, my inner child recalls fondly that first day I managed to stand up on a pair of skis on a crystal blue lake. I’m assuming it was crystal blue; I couldn’t actually see it. The wind whipped through my wet hair as I soared behind the boat, fishhooks and bait flying behind me.

The there were lessons in making homemade ice cream by rolling a can filled with sweet cream back and forth on a beach towel for hours until all the kids gave up and decided to make S’mores over the Hibachi instead. But we still managed to save enough room for ice cream when the grown-ups—whose tolerance for tedium was much higher than ours was—finally popped the lid off the can and scooped out frosted deliciousness into our bowls. Let’s not forget the lessons in love that summer also brings. There was that one July in high school when I met my first true love Danny while hanging out at the beach with my friends Rizzo and Frenchy… oh, wait, that wasn’t my life, that was Grease.

None of my childhood summers involved tight leather pants and singing duets with greasy-haired guys. But you know what, that would be the perfect summer activity for me this year since the Slip-n-Slide and tree-hanging are out. I wonder if they make breathable vegetarian leather pants that won’t cause me to pass out when I have a hot flash. I should Google that.