Home  »  Articles  »  Summer Separates the Boys from the Girls

Summer Separates the Boys from the Girls

Which is better: bigger or smaller? It depends on one thing. 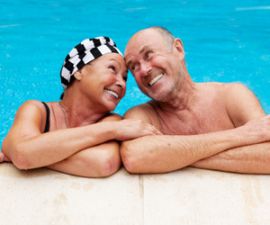 I was at a garage sale one afternoon last weekend when a man who looked to be in his eighties noticed a very large weed wacker near the door.

“That for sale?” he asked as he rushed over to it as fast as his cane would let him.

“Yep. We’re asking $5,” the woman answered with that I hope he’s not just toying with me tone that every garage sale organizer gets as the day wears on and it becomes clear than all that stuff, including the treadmill and the giant moose with blue eye shadow, is going to have to be packed up and dragged inside again.

“Sold,” the man said under his breath, hoping to transact the deal before his wife noticed. No such luck. A curly-haired sprite of a woman left the Jane Fonda videotapes she’d been perusing and appeared at his side in a flash, her tiny fists balled up on her hips.

“Bob, you can’t even lift that thing. Besides, we don’t have weeds in our apartment at Ya-Po-Ah Terrace.”

Later that same day, I was at the mall with a friend when I overheard two women in the dressing room talking.

“I read that Jennifer Hudson went from a size 16 to a 6. If she can do that, I bet by July 4th weekend I’ll be skinny enough to get into this size 12 sundress! Only fifteen more pounds and I’m so there!”

“Me too! Look out world; soon there will be less of us to love!”

To me, these to stories capture how men and women’s experiences of summer differ: for the guys it’s all about bigger, faster, and louder, while most women try to become smaller and less conspicuous. It’s Godzilla versus The Shrinking Woman.

Here’s another case in point: while walking my dogs recently, a man waved to us from atop his riding lawnmower. He said something too, but the roar of the suburban tractor drowned it out. Perhaps what he said was “I know my lawn is only the size of a postage stamp and I have to back this mower into the street to turn it around, but I AM KING OF THE WORLD!”

I can see how a riding lawn mower would be a great idea for someone with several acres of grass, but I can’t for the life of me think of why guys need one to trim the two dandelions that have sprouted in the driveway cracks. I have more carpet than he has lawn, yet I have never lain awake at night wishing someone would invent a riding vacuum cleaner with an onboard chocolate dispenser. Of course, the testosterone coursing through my veins wouldn’t fill up a pink Hello Kitty thimble, so what do I know?

Speaking of bigger and louder, that definitely applies to fireworks. Don’t get me wrong—I love a beautiful fireworks show such as the one at Alton Baker Park on July 4th, with each explosion timed to the 1812 Overture or Lady Gaga’s Poker Face (that’s right, I’m up-to-date on my musical references, thanks to Glee). But the guys can never get enough of things that go boom in the night. I once had a neighbor who stuck leftover firecrackers under his weeds in an attempt to blow them sky high. He was happy with the result too, despite the fact that he ended up singeing off most of his eyebrows. Most women are happy to settle for pretty—and quiet—sparklers and leave our eyebrow maintenance to the professionals.

Of course, women’s summertime pursuit of trying to achieve the impossible is just as dangerous. I’m totally onboard with staying fit and healthy, but most of us can do that in the average-sized body we’re meant to have. My personal feeling is that zero is an imaginary number and if you diet and exercise your way there, you’ll disappear. I like there to be enough of me to cause a commotion or at least hold up my sparkler.

While the guys are blowing things up and marveling at how much horsepower their new riding BBQ has (laugh now, but you know it’s only a matter of time), many women are turning down potato salad and popsicles because they have too many calories, and don’t even get us started on the trans fats!

As much as the men’s toys may annoy us, we women would do well to take a page from their handbook (they’re not reading it anyway, because as well all know, men don’t need instructions). Let’s spend more time this summer focusing on all the power we have under our hood and not on the size of our chassis.