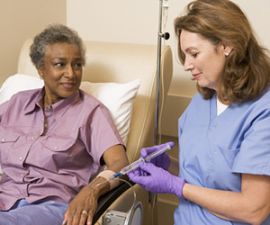 Over the next 20 years, the number of new cancer cases diagnosed annually in the United States will increase by 45 percent, from 1.6 million in 2010 to 2.3 million in 2030, with a dramatic spike in incidence predicted in the elderly and minority populations, according to research from The University of Texas M. D. Anderson Cancer Center.

The study, published in the Journal of Clinical Oncology, is the first to determine such specific long-term cancer incidence projections. It predicts a 67 percent increase in the number of adults age-65-or-older diagnosed with cancer, from 1 million in 2010 to 1.6 million in 2030. In non-white individuals over the same 20-year span, the incidence is expected to increase by 100 percent, from 330,000 to 660,000.

"In 2030, 70 percent of all cancers will be diagnosed in the elderly and 28 percent in minorities, and the number of older adults diagnosed with cancer will be the same as the total number of Americans diagnosed with cancer in 2010," said Smith, the study's senior author. "Also alarming is that a number of the types of cancers that are expected to increase, such as liver, stomach and pancreas, still have tremendously high mortality rates."

Unless specific prevention and/or treatment strategies are discovered, cancer death rates also will increase dramatically, said Smith, who is currently on active military duty and is stationed at Lackland Air Force Base.

To conduct their research, Smith and his team accessed the United States Census Bureau statistics, updated in 2008 to project population growth through 2050, and the National Cancer Institute's Surveillance, Epidemiology and End Results (SEER) registry, the premier population-based cancer registry representing 26 percent of the country's population. Cancer incidence rates were calculated by multiplying the age, sex, race and origin-specific population projections by the age, sex, race and origin-specific cancer incidence rates.

With respect to race, a 100 percent increase in cancer is expected for minorities (.33 to .66 million); in contrast, in white Americans, a 31 percent increase is anticipated (1.3 to 1.7 million). The rates of cancer in blacks, American Indian-Alaska Native, multi-racial, Asian-Pacific Islanders and Hispanics will increase by 64 percent, 76 percent, 101 percent, 132 percent and 142 percent, respectively.

Regarding disease-specific findings, Smith and his team found that the leading cancer sites are expected to remain constant - breast, prostate, colon and lung. However, cancer sites with the greatest increase in incidence expected are: stomach (67 percent); liver (59 percent); myeloma (57 percent); pancreas (55 percent); and bladder (54 percent).

Given these statistics, the role of screening and prevention strategies becomes all the more vital and should be strongly encouraged, said Smith. In the study, Smith and his team site: vaccinations for hepatitis B and HPV; the chemoprevention agents tamoxifen and raloxifene; interventions for tobacco and alcohol; and removal of pre-malignant lesions, such as colon polyps.

These findings also highlight two issues that must be addressed simultaneously: clinical trial participation and the increasing cost of cancer care. Historically, both older adults and minorities have been under-represented in such studies, and, therefore, vulnerable to sub-optimal cancer treatment. Simultaneously, over the past decade in particular, the cost of cancer care is growing at a rate that's not sustainable.

"The fact that these two groups have been under-represented in clinical research participation, yet their incidence of cancer is growing so rapidly, reflects the need for therapeutic trials to be more inclusive and address issues that are particularly relevant to both populations," said Smith. "In addition, as we design clinical trials, we need to seek not only the treatment that will prolong survival, but prolong survival at a reasonable cost to patients. These are two issues that oncologists need to be much more concerned about and attuned to."

Another issue that needs to be addressed is the shortage of health care professionals predicted. For example, according to a workforce assessment by American Society for Clinical Oncology (ASCO), the shortage of medical oncologists will impact the health care system by 2020. Smith said ASCO and other professional medical organizations beyond oncology are aware of the problem, and are actively engaged in efforts to try and grow the number of physicians, as well as encourage the careers of nurse practitioners and physician assistants who are part of the continuum of care, to best accommodate the increase in demand forecasted.

"There's no doubt the increasing incidence of cancer is a very important societal issue. There will not be one solution to this problem, but many different issues that need to be addressed to prepare for these changes," said Smith. "I'm afraid if we don't come to grips with this as a society, health care may be the next bubble to burst."