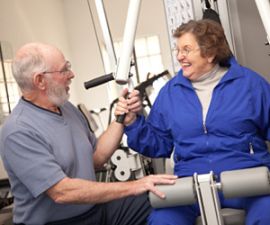 Two of the best ways to avoid depression are exercise and helping others.

Depression is one of the most destructive diseases of modern life. According to Dr. Stephen S. Ilardi, author of The Depression Cure, "Depression is a devastating illness. It robs people of their energy, their sleep, their memory, their concentration, their vitality, their joy, their ability to love and work and play, and—sometimes—even their will to live."

Not only does depression take away our spiritual and emotional health, it also undermines our physical health. Recent research reported by Johns Hopkins Medical Center indicates depression increases the risk of heart disease and it also aggravates chronic illnesses such as diabetes, arthritis, back problems, and asthma, leading to more work absences, disability, and doctor visits.

Now results from a large Norwegian study suggests that depression increases the risk of death from most other major diseases, including stroke, respiratory illnesses, cancer, multiple sclerosis, and Parkinson's disease. It is also associated with accidental deaths. This is an important study because the number of subjects is large and the research protocol is first rate.

Researchers gathered baseline information on physical and mental health for 61,349 Norwegian men and women, average age 48, and then noted the number of deaths and their causes during an average follow-up of nearly 4.5 years. Participants who had significant depression (2,866) had a higher risk of dying of most major causes of death, even after adjusting for age, medical conditions, and physical complaints at the study's outset.

As reported in the respected journal Psychosomatic Medicine the research team concluded, "Depression may increase the risk of death by directly affecting the cardiovascular and nervous systems. In addition, depression may lead to poor health habits, such as smoking, alcohol abuse, and a sedentary lifestyle, and may affect people's ability to follow treatment regimens."

With our modern pharmacological treatments, we would think that depression would be cured by now. But in fact it is on the rise. According to Dr. Ilardi, "About one in four Americans—over seventy million people—will meet the criteria for major depression sometime in their lives." And the rates of depression and suicide are going up and up. "It's roughly ten times higher today than it was just two generations ago," says Ilardi.

Yet, we continue to take anti-depressant drugs in record numbers. More than 170 million prescriptions for these drugs were written in the last few years. In fact, antidepressants have become the most prescribed drugs in the United States. They're prescribed more than drugs to treat high blood pressure, high cholesterol, asthma, and even headaches. Drugs are big business. Antidepressant drug sales alone have become a $21 billion dollar a year industry.

But are they really the best treatment available for the millions of people throughout the world who suffer from depression? Based on my own clinical experience working with depressed men and women over the last 44 years, I have found there is a better way. It involves simple, safe, and inexpensive life-style changes.

Dr. Ilardi calls them TLC, or Therapeutic Lifestyle Changes. He describes six lifestyle elements that are based on the practices that were part of human life before we became so urbanized, stressed, and depressed. These include the following:

1: Exercise
Three times a week get 35 minutes of aerobic exercise. Aerobic exercise is anything like running, walking fast, biking, or playing basketball, that gets your heart rate elevated to about 120-160 beats per minute. Anaerobic exercise (like yoga or weightlifting) is better than nothing, but the strongest antidepressant effects have been observed from aerobic exercise. Lots of people report that finding a regular exercise partner and routine helps them stay motivated.

2: Omega-3 fatty acid supplements
You can buy these at a drugstore or health food store. Look for a brand that will give you 1000 mg of EPA and 500 mg of DHA per day. This is the amount that has been shown in studies to be beneficial to people with depression.

You can take these even if you are on antidepressant medication; there are no known interactions with drugs. The only side effects patients reported are that they sometimes burp up a fishy taste after taking them. Solutions to this problem are to freeze the pills and take them right before a meal. If all else fails, there is a liquid form available that some people prefer.

3: Light Exposure
This element of the protocol is most helpful to people who notice that there is a seasonal component to their depression. We recommend that people get at least 30 minutes of bright light exposure per day. You can actually go outside in the sun (take off the sunglasses, but leave on the sunscreen!) or get light exposure from a special light box that emits the same amount of light (10,000 lux).

You should try to get light exposure at the same time every day. Some people like to sit by the light box while they eat breakfast and read the paper. Some like to sit by it while they read or study in the evening. Experiment to see what works best for you. And don't miss a day of light exposure if you can help it. This is something that will only work for you cumulatively if you are consistent!

4: Anti-rumination Strategies
Rumination is the habit that many depressed people get into of dwelling on their negative thoughts. Rather than coming up with a solution to a problem and acting on it, people with depression often let their negative thoughts spiral out of control. It is important to recognize rumination for what it is and put a stop to it immediately. Rumination only makes peoples' moods worse. When you find yourself doing it, do one of these things: call a friend, exercise, write down the negative thoughts in a journal, or do some other pleasant activity (like walking, reading, or talking to a friend).

5: Social Support
This is good for men and women, but men often need it the most. You have probably noticed that as we get more depressed, we are less motivated to seek out others for socializing. This is the time to reach out to others even if you don't feel like it. It may save your life.

Exercising together can be a great way to combine elements. Also being with others keeps us from sitting alone and worrying and ruminating. There's a saying I use with my clients. "Never worry alone." A lot of the destructiveness of our negative mind-set when we are depressed is that we go around and around in our own heads and don't get the benefits of input from others.

Another thing I tell my clients is to help someone else when they are feeling down. One of the best pick-me-ups I've found is the satisfaction we get when we do something for another person, even if its just a small thing like a kind word or a small favor.

6: Sleep Hygiene
Most of us need to get 8 hours of sleep per night and most of us are sleep deprived. Men generally get less sleep than women and for depressed men, lack of sleep can be debilitating. One of the biggest risk factors for depression is sleep deprivation.

It may take awhile to re-establish healthy sleeping habits. We often get used to sleeping less and come to believe that we don't really need that much sleep. Here's what can help. Go to sleep and wake up at the same time every night. Prepare yourself for bed by having a "bedtime ritual". Dim the lights, turn off the TV and computer, put on your PJs, and do a quiet activity like read. Avoid caffeine and alcohol for several hours before you plan to go to bed.† A soothing back or foot rub before going to sleep can be a welcome relaxant.

Of course you're not going to hear big multinational corporations touting the benefits of sleep, friends, healthy thinking (rather than "stinkin' thinkin"), sunshine, fish oil, or exercise. How can big profits be made from these simple things. They may not make pharmaceutical companies a lot of money, but you'd be surprised what good they will do for the average human being trying to deal with the stresses of modern life.

Try it, you may be surprised.