Sex and Aging: Women in for a Surprise - Retirement Net by

Home  »  Articles  »  Sex and Aging: Women in for a Surprise

Sex and Aging: Women in for a Surprise 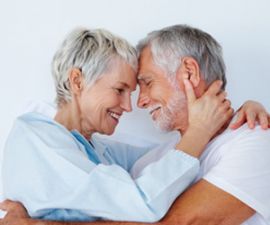 The expectation of aging couples goes something like this: there comes a time when the man may be ready and willing, but just no longer able. But a study conducted by Harris Interactive has revealed that it is older women, not older men, who are more likely to suffer from physical problems that decrease the frequency and enjoyment of sexual activity with age.

The result was contrary to the expectations of those being polled. A majority believed that physical problems—such as erectile dysfunction—would be a more significant factor for men; yet more women (67%) than men (59%) reported having experienced symptoms that limited their ability to have or enjoy sex.

In addition, 71% of adults responded that less frequent sex is to be expected as people age.

"The survey reveals a knowledge gap about the challenges women and men experience as they age," said Dr. David B. Schwartz, an obstetrician-gynecologist at Christ Hospital in Cincinnati, OH. "The majority of people surveyed believe men are more likely to experience sexual symptoms than women. This may be due to the volume and ease of accessibility to information about erectile dysfunction. Conversely, most women face sexual symptoms as they go through menopause, with less information readily available to them."

The problems women face are primarily menopause-related: vaginal dryness was reported by nearly three-quarters of female respondents (71%), closely followed by low libido (70%) and more distantly by pain during intercourse (34%).

According to Dr. Schwartz, "There seems to be a lack of knowledge about the vaginal symptoms of menopause in women and the treatments available. If women are experiencing vaginal dryness and painful sex, these may be symptoms associated with their menopause. Women experiencing these symptoms may be candidates for estrogen therapy applied locally, which can be prescribed by a health care practitioner. I encourage women to explore treatment options with their health care providers, and discuss these with their partners."

The poll also showed that while a significant majority of both men and women have reported physical problems, nearly half of those polled (46%) indicated they would prefer to have sex more often. Over half (55%) said that sex is an important part of their relationship.

But while sexual activity itself remains important for older Americans, communication was a better indicator of the health of relationships. Of those suffering symptoms who had discussed their symptoms with their partners, three out of four respondents reported overall satisfaction with their relationships.