Salt: How Much Is Enough? - Retirement Net by

Salt: How Much Is Enough?

...and how much is too much? The answer will vary from one person to another. 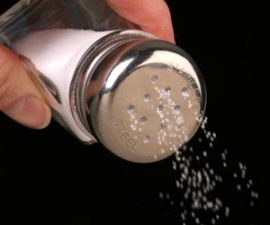 Medical authorities claim that we only require 500 mg sodium per day, based upon the amount of salt lost throughout the day. Knowing that no one can eat so little salt, the general advice is Americans should consume between 1,500 to 2,300mg sodium per day. Policymakers have focused on the processed food industry to reduce the salt content of foods, to help Americans keep their sodium consumption to the recommended limits. But are the recommended limits reasonable when applied to everyone?

No two people are the same when it comes to salt in the diet. Studies around the world have repeatedly shown that, regardless of total calories consumed, men consume significantly more salt than women do.

There are many salt reduction advocates who forecast that if Americans drop all salt consumption, hundreds of thousands of deaths from cardiovascular disease will be prevented annually in addition to saving billions of dollars in health care costs. They base this solely on salt's role in maintaining blood pressure.

According to a study in the Journal of Chronic Diseases, when salt in the diet is significantly reduced, about 30 percent of the population experiences a tiny reduction in blood pressure, 20 percent will actually experience a small increase in blood pressure and the remaining 50 percent will show no effect at all. When the entire population is considered as a single homogeneous mass, individual genetic, physical, gender and cultural differences are ignored and resulting policies end up benefiting some while harming others.

Depending on where in the world you live, women consume 800 to 1,500 mg less sodium per day than men do. In the U.S., this difference amounts to about 1,160 mg less sodium per day. While the plasma concentration of men and women are identical, men consume and excrete far more salt than women do. The salt content of processed foods doesn't account for this since the amount of processed foods in the diet varies significantly around the world and men and women eat from the same food supply. Can salt have specific physiological functions beyond maintaining blood pressure?

Studies have shown that pregnant women with a decreased salt intake give birth to low-weight babies who have a significantly increased salt appetite throughout their lives. Low salt intakes also stimulate the renin-angiotensin-aldosterone system (a hormone system that regulates blood pressure and fluid balance), causing a cascade of potential negative consequences, including metabolic syndrome and diabetes. Hyponatremia (lower than normal sodium levels) can lead to decreased stress management, impaired sleep function, cognitive disorders and, in the elderly, falls, unsteadiness and attention deficits.

Although the specific risks associated with a population-wide policy on salt reduction will vary, women will not respond equally to men because no policy can supersede the biology of gender differences. This means women can be at a greater risk of health concerns if statistics don't take gender into consideration.

Article source: ARAcontent. To learn more about salt and health, go to www.salthealth.org.