Do you feel any? Should you? 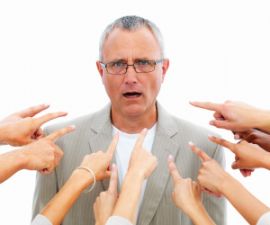 A comment made by a reader of one of my articles prompted me to do some serious thinking about the issue of retirement and guilt. The reader wondered how much a part guilt plays in one’s satisfying retirement. Frankly, I have never thought about it in those terms.

Yes, the way our most disadvantaged citizens are treated bothers me tremendously. It is hard to fathom some of the “bumper sticker” hate talk I hear about folks who are homeless or forced to fight to survive on not enough food and minimal health care. The approach of some in government to make up the deficit by cutting the bare necessities even further for these people because they have no political “value” doesn’t line up at all with my religious beliefs. When children are involved I feel ill.

But, as the reader noted, for most of us, that is not our situation. We have some type of roof over our heads, enough food and medical care to be as healthy as our bodies allow us. We have heat in the winter and cooling in the summer. There is likely at least one car in the garage unless we have chosen to to without. When we compare our lifestyle with so many others we are blessed. Does that ever raise a feeling of guilt? In part, here is his comment:

“Feelings of guilt at being able to retire when so many others are likely to have no opportunity. We are able to retire due to thoughtful (or lucky?) strategies of investment and/or frugal lifestyle. Or due to the good fortune of being born into an advantaged/educated household. Still, when I see so many hardworking people—and there ARE many hardworking poor people—who have no real hopes of retiring, I have to accept that the world is indeed not fair. Still, it rankles me that working hard does not guarantee some kind of retirement opportunity (Social Security alone, though helpful, is not enough).

When I was retiring from my teaching career, so many colleagues said that I certainly “deserved it”. Some of being able to retire was due to hard work and strategic living, but much was also due to a small inheritance and the larger inheritance of good health and good education. There are lots of hardworking and less fortunate individuals who are also deserving.

Also feelings of guilt from no longer being “productive” in the typical 9 to 5 style. Not necessarily new, I know, but many of us don’t feel useful unless we are on that blasted “hamster wheel” of the work world.

All sorts of these feelings of guilt can be turned into appreciation for whatever gifts we have earned or been arbitrarily given, but for me, it has taken some time and processing.”

Steve raises some very important points to think about. The common definition of guilt implies that something wrong has been done, or a sin committed. It leaves one with a feeling of self-reproach for some ethical or legal failure. I’m pretty sure Steve isn’t implying he “cheated” his way into retirement.

His “guilt” is one of comparison: comparing his situation with other human beings who are in a much worse state through no fault of their own. In fact, he notes their situation may be in spite of doing things correctly. That prompts the question, “Why me? How can I live the way I live while others suffer without me feeling guilty?”

The feelings that Steve expressed are those of a man with a finely tuned sense of morality and fairness. What he sees is the condition of humanity: there are perceived “winners” and “losers “ who may be in those categories through no action of their own. There will always be poor people and always be those who are well-off. But, what he is reacting to are folks who have been “mis-categorized” and can do nothing about it.

Before I get too heavy into philosophy and religion let me stop here and make one point: Steve’s comment has brought to light a very important issue—that of fairness in society and what our responsibility is to recognize and react to it.

I must admit I don’t feel guilty in the traditional sense about being able to retire early and live decently. I also don’t believe I did anything better or different than many of my peers who are still working and might continue to do so for years. Yes, I worked hard, saved a lot and lived within my means. But, the talents and skills I was born with came from God. My educational and economic advantages came from parents. These factors were primarily responsible for who I became.

I do feel guilty that there isn’t more I can do to make things more fair. The best I can do is try to make the little parts of the world I touch a little less unhappy and depressing.