Here are some alternatives to tapping your retirement nest egg early. 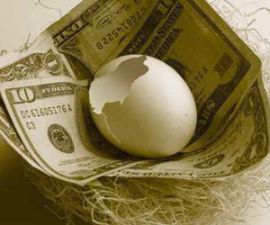 A recent trend shows that many individuals are looking to raise money to pay the tuition of their children or grandchildren, and a ready source of available funds resides in their 401(k) plans and IRAs.

Besides withdrawing money from these plans to pay tuition, many individuals also need funds to live on, pay bills and even avoid foreclosure. We are seeing a large increase in early withdrawals from retirement accounts, which is not surprising given the poor state of the economy as well as the reasons mentioned above.

If you find yourself in need of additional cash, you should weigh several alternatives before raiding your retirement savings. Her are three options you might want to consider if you can’t find other sources of money.

Option One. If you participate in a 401(k) plan, consider taking a loan if it’s available to you. Most 401(k) plans, and several other types of employer sponsored plans such as profit sharing plans, 403(b) plans and certain 457(b) plans, allow individuals to borrow up to one-half of their vested balance, not to exceed $50,000. Terms may vary, but most require borrowers to repay their loans within five years. The 401(k) loan typically requires no credit check and minimal paper work. You may even get a better interest rate than at a bank.

Option Two. Take regular distributions from an IRA. Individuals are permitted to make regular withdrawals of equal amounts from their IRA over a predetermined period of time without paying a 10% early withdrawal penalty for being under age 59½ , provided they adhere to an IRS-sanctioned or approved schedule. Generally, individuals must take their payments, known as 72(t) distributions, at least once a year for a minimum of five years or until age 59½, whichever takes longer. You get a regular stream of income for an extended period of time, but you must be careful as the IRS imposes tough penalties on individuals who don’t abide by their pre-arranged withdrawal schedules.

Option Three. Tap a Roth IRA. Because contributions to Roth IRAs are made with after tax dollars you can withdraw these same contributions without paying a penalty or income tax. There is, however, a five year waiting period before you can withdraw the earnings on these contributions and receive the same tax treatment. This five year period commences on January 1 of the tax year for which you fund your first Roth IRA either by an annual contribution or conversion. A separate five year period applies to each conversion you make in order to avoid early withdrawal penalties if you are under age 59½. You might want to think twice before using this option. While withdrawals from a Roth IRA are generally tax free, you could be giving up many years of tax free growth.

Retirement nest eggs exist to help insure a comfortable financial retirement for their owners. Taking early withdrawals may put that in jeopardy, so individuals should investigate other options available to them before using retirement savings early. Unfortunately, for some individuals there are no other options. If you find yourself in this predicament, make sure you seek assistance from a qualified retirement plan advisor who can help you devise a tax-efficient withdrawal strategy and help you avoid the pitfalls inherent in any of the strategies presented here.