Put Down the Phone 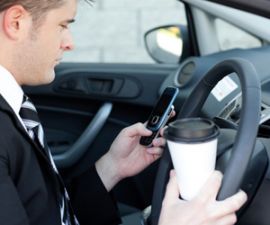 The National Safety Council estimates that 28% of car crashes, about 1.6 million a year, are due to drivers using cell phones to talk or text. There are about 34,000 deaths while driving each year.

Please do the math. Some say the numbers are lower, but you’re still talking perhaps 10,000 deaths—each year. Preventable deaths. And then add what are perhaps hundreds of thousands of injuries each year—preventable injuries.

How do you ban this carnage? Ban cell phone use. Then enforce the laws.

We grieve every day for the thousands of Americans killed in Iraq and Afghanistan and the untold number of civilians dead in those wars. Those conflicts have continued for eight and ten years. Many soldiers have returned home maimed for life, and every community knows that toll. In fatalities we lose about twice as many people each year from cell phone provoked driving deaths.

Cell phone use is more than a matter of convenience—it’s a health issue in every corner of this country. It’s a particular life and death issue for the young, whose risk controlling frontal lobes we now know may not mature until ages 25-30.

Who Bans Cell Phone Use?

Texting is banned in 30 states, according to the national governor’s conference. Handheld use is banned in only 8 states, though that includes California and New York. No one bans hands free cell phone use.

Does Hands Free Use Decrease Accidents?

Most studies say no. There is no real advantage between hands free and handheld cell phones in preventing accidents. Though it appears sensible, in terms of public health this legislation makes no sense.

Why Do People Use Cell Phones Driving?

They use them 24 hours a day. Many check their cell phones before they sleep, when they wake—and in the middle of the night. Many teenagers text throughout the night, another reason for poor learning and an increasingly obese youthful population.—itself an important public health and an economic issue.

People have become used to doing almost everything in their car imaginable, from eating to hairstyling to reading. I’ve seen docs reading journals and newspapers while they drive.

Will the Situation Get Worse?

If auto companies are not checked. A huge “profit center” for cars and trucks is electronic media inside the vehicle—whose regular use increase distractions and increases the chances for fatal wrecks. Auto makers want to turn your car into a mobile living room.

No. Kids will still text, just as they do under the table when eating with their parents or under their desk chairs at school. Without enforcement, nothing will happen.

Like many public health issues, the first response is generally “you’ve got to be kidding.” Everyone “knows” people won’t give up their cell phones.

Even if they die? Even if they’re fined, or with repeat offence can lose their licenses?

Similarly, everyone “knows” that hospital infections are inevitable. Antibiotic resistant infections seem almost impossible to eradicate—and we’re running out of new antibiotics to treat them, with a threat of major epidemics ahead.

Yet Norway has managed to cut its level of methicillin resistant staph aureus infections (MRSA) by about 99%. Similar infection control measures in one community, Kings Lynn in Britain, cut those infections 80%. Now the VA has cut ICU MRSA infections by 62%.

MRSA kills about 20,000 Americans a year. We can change that.

People like to talk, but driving is more than transportation—it’s also communication. Personality and social status are communicated through the car one drives, but the manner of driving also matters.

Some of us drive slow, some quickly, some defensively, some aggressively. But many complain about the driving of others. Too many do not communicate what they are doing—they don’t use their turn signals; they stop suddenly; they change lanes without any indication they’re doing it.

Instead we should drive when we drive—and just that. We can talk to those in the car, listen to the radio, yet keep our attention on the road so that we come home safe and sound.

And alive and well.