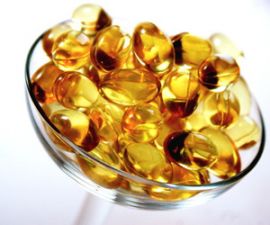 Omega-3s ease psychological distress and depressive symptoms often suffered by menopausal and perimenopausal women, according to researchers at Université Laval's Faculty of Medicine. Their study, published in the February issue of The American Journal of Clinical Nutrition, presents the first evidence that omega-3 supplements are effective for treating common menopause-related mental health problems.

Dr. Michel Lucas and colleagues recruited 120 women age 40 to 55 and divided them into two groups. Women in the first group took three gel capsules containing a total of one gram of EPA, an omega-3 fatty acid of marine origin, every day for eight weeks. Those in the second group followed the same protocol, but took gel capsules containing sunflower oil without EPA.

Test results before and after the eight-week period indicate that omega-3s significantly improved the condition of women suffering symptoms of psychological distress and mild depression. "The differences we observed between the two groups are noteworthy," commented Dr Lucas, "especially considering that omega-3s have very few side effects and are beneficial to cardiovascular health." However, no positive effect was observed among a small group of women with more severe depressive symptoms.

Women with hot flashes also noted that their condition improved after consuming omega-3s. At baseline, the number of daily hot flashes was 2.8 and dropped by an average of 1.6 in the group taking omega-3s and by 0.5 in the control group. The change that can be attributed to the use of omega-3s, i.e. a decrease of 1.1 hot flashes per day, is equivalent to results obtained with hormone therapy and antidepressants. Details of these results were published in the November 20, 2008 online edition of the journal Menopause.

Many women suffer from depressive symptoms during menopause and perimenopause. Some take antidepressants for relief even though their effectiveness is controversial. Mistrust of hormone therapy and antidepressants leads certain women to turn to alternative methods whose effectiveness has not yet been scientifically demonstrated. This study by Université Laval researchers corrects this situation with regard to marine-sourced omega-3s.