In our efforts to avoid skin cancer, we may be missing one of Nature's greatest healers: the sun 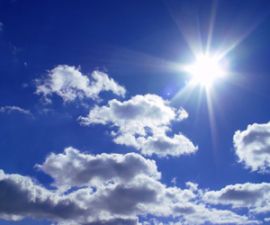 The sun lifts our spirits and for that reason enhances digestion, circulation, and well-being. The Washington Post (May, 2004) reported another reason to bask in the sun. Most Americans, particularly African Americans, suffer from an unrecognized deficiency of vitamin D, which we get from sunshine. Ultraviolet sun rays act on the skin to produce the vitamin, which is absorbed into the body. The lack of vitamin D increases bone-thinning osteoporosis, life-threatening bone fractures, and severe tooth decay. A generation of sun-avoiders is also beginning to see serious diseases related to vitamin D deficiency—many forms of cancer, high blood pressure, depression, and immune-system disorders, such as multiple sclerosis, rheumatoid arthritis, and diabetes.

Doctors have found adults disabled by severe muscle weakness and pain until they were treated for a vitamin D deficiency. There is even a current rise in rickets cases, a bone disorder caused by vitamin D deficiency that causes bowlegs and other bone malformations. Because the nutrient's apparently widespread functions in the body are just now being recognized, little research has been done to try to answer some of the most basic questions, such as how much is needed for optimal health.

One thing is clear: we need more vitamin D as we age and gain weight. Research has shown that vitamin D gets trapped in fat, so obese people have lower blood levels of D. They also have higher rates of cancer. People with diabetes are also prone to cancer, and their damaged kidneys have trouble converting vitamin D into a form the body can use.

The amount of vitamin D absorbed from the sun depends on where people live, skin pigment, age, and other factors. Dark-skinned people and anyone living in northern latitudes make far less than other groups. With people spending more time indoors, using sun block when they are outside, and smog obscuring the sun on many days, the amount of vitamin D people create naturally has become very low, many scientists say.

Milk is fortified with vitamin D, but most Americans get very little through their diets. That is not the case in Japan where eel, a high source of vitamin D, is a favorite dish and the number of people suffering from prostate and breast cancer is very low compared to America. Reinhold Vieth, a University of Toronto vitamin D researcher has said, "There's been a lot of evidence emerging that indicates there's more to vitamin D than we thought. For me it's a no-brainer. We're not getting enough."

A number of studies have found low levels of vitamin D in children, the elderly, and women. One federal study of women nationwide found that nearly half of African American women of childbearing age may be vitamin D deficient.

Vitamin D interacts with every tissue in the body. The incidence of certain diseases seems to vary depending on sun exposure and vitamin D levels. Breast, colon, and prostate cancer increase the farther you get from the equator, where exposure to ultraviolet light from the sun is greatest. "The highest rate of prostate cancer is among African Americans, followed by countries in northern Europe," said Gary G. Schwartz, a cancer researcher at Wake Forest University School of Medicine. "One way that they are alike is both groups have very low levels of vitamin D."

Vitamin D appears to regulate the immune system, and researchers have found associations among sun exposure, vitamin D levels, and the incidence of autoimmune diseases such as multiple sclerosis, lupus, and diabetes, all diseases in which the immune system attacks the body. (The highest incidence of MS in America is in New England, especially Vermont. The lowest is in Florida.) Some studies suggest vitamin D can reduce blood pressure, which would cut the risk for heart disease and strokes. Others suggest that low vitamin D levels may contribute to depression and other psychiatric conditions.

"It's a major health problem," said Michael F. Holick, Ph.D, M.D., a Boston University scientist who is the most prominent proponent of the role of vitamin D in health. Dr. Holick argues that instead of the current recommended dose of 200 to 600 international units a day, most people should be getting at least 1,000 units a day. Dr. Holick agrees with nutritionist Dr. Bernard Jensen, who recommends exposing the hands, face, arms, and legs or the back to the sun for 15 minutes a day a few days a week.

Because ultraviolet light contained in sunlight may increase skin cancer and wrinkles, many experts say people can get enough safely by taking vitamin D supplements, sidestepping the contentious sunlight debate. Food sources of vitamin D include: fish liver oils, sardines, herring, salmon, tuna, fortified milk and dairy products. (Autoimmune illnesses are aggravated by cow dairy, not goat or sheep dairy.) If you have never eaten baked eel, which is called unagi, from a Japanese restaurant, I strongly recommend its mildly sweet flavor. I enjoy baked eel along with hijiki seaweed salad, an excellent source of calcium. Grilled sardines are an excellent dish at fine Spanish and Portuguese tapas bars.

Vitamin D supplements work best when taken with vitamins A and C, choline, calcium, and phosphorus. Taken with vitamins A and C, if helps prevent colds and conjunctivitis (pink eye). Vitamin D, being fat soluble, is absorbed with fats through the intestinal walls. A good time to take vitamins A and D, calcium, and other supplements for joint comfort is at breakfast with (naturally acidic) fruit and tea. The Vitamin Shoppe makes a dry, non-oily vitamin A and D capsule using cholecalciferol as vitamin D. For comfortable digestion, use a non-fish oil vitamin D if your meal includes dairy or eggs.

If you live in an overcast or northern climate like New England or Seattle, increase your vitamin D3 intake, especially during winter when sunlight is reduced. Research done in Maine has shown that we lose bone mass in the lower back and legs more during winter than any other time of year. Vitamin D, calcium, and vitamin C improve circulation, muscle mass, and stamina, which helps reduce cellulite. Getting enough vitamin D certainly improves your form and endurance for running, walking, and swimming.