We’ll have a complete list as soon as there's a cell phone app. 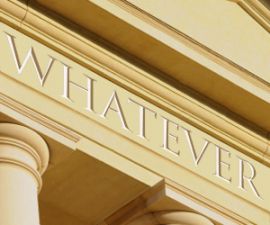 Last Friday I saw two college students collide head-on while they were texting and walking. The truth is I could have stopped the accident, but then I’d just be the old fuddy-duddy who worries about these things because I’m not cool and hip. So I let it happen, thinking maybe they would learn a little something. After they crashed into each other and cursed for a few minutes, both resumed texting and walking as if nothing had happened. Lesson SO not learned.

For centuries children were warned to “Watch where you’re going,” but apparently teenagers today believe they are protected by some kind of cell phone app that prevents any harm that may happen to them as they walk, bike, or skateboard while simultaneously downloading cats flushing the toilet or tending to their Farmville gardens on Facebook.

I spend part of my time teaching on a college campus and there are a number of common sense adages that I thought everyone ascribed to, but I was clearly wrong. For example, I learned as a child that when riding a bike it was important to give some type of warning when approaching a pedestrian from behind. We were either supposed to honk our horn or loudly yell, “On your left!” From what I can tell today, cyclists and skateboarders are all involved in a real life video game in which they score points for pedestrians who are either run down or suffer heart problems as a result of close calls. I believe the points double if the pedestrian happens to be a professor.

Here’s another piece of advice that has fallen by the wayside (a place, by the way, that existed until about twenty years ago, but if you say “wayside” to a twenty-something today, chances are she will glare at you as if you’ve suggested she use a landline phone): “Walk facing traffic so that you can see vehicles as they approach.” This is a useful suggestion because you can see into each car and determine whether the driver also sees you or is instead watching Pirates of the Caribbean on a dash-mounted DVD player while driving. But no one ascribes to this advice any more. Instead the approach seems to be, “Serpentine across the street several times because you’re busy Google-mapping the location of your next class. Ignore all forms of traffic unless they appear on your digital device.”

If you haven’t been on a college campus lately, you might also be surprised to learn that other old rules have disappeared and/or been replaced with new ones. Just to prevent embarrassment and confusion if you visit your children or grandchildren at college or plan to return to school yourself, let me set the record straight:

I’m sure there are some rules I’ve forgotten, but until there’s a cell phone app that let’s us all know what they are, this list will have to suffice.

College is supposed to be a place for higher learning and I can definitely say I’ve learned a lot. I’ve learned that I’m going to start videotaping everything that happens while I walk from class to class so that I can post the next viral video. Maybe that way my students will pay attention to me.