Myths of the Mind - Retirement Net by

Myths of the Mind

A lot of what we think we know isn't true...and that's good news. 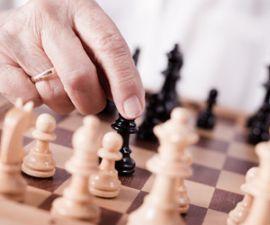 Who says you can’t teach a mind new tricks at any age? Recent research shows that Americans have the power to positively influence their brain function throughout life—an important realization that is especially relevant for the more than 78 million baby boomers in the United States. Brain health is one of the top health-related concerns of aging populations and has been identified by the Centers for Disease Control as a public health priority.

“The fear of memory loss and losing brain capacity looms large among the minds of boomers,” says Dr. Majid Fotuhi, a leading neurologist and author of “The Memory Cure.” “But we can maintain and even improve our brain health as we age. In fact, our brains have the ability to grow and change throughout life.”

1. The brain stops growing after childhood. A decade ago, many experts would have scoffed at the idea that the brains of adults, particularly older adults, could grow or develop in any significant way. But that has changed. Research increasingly suggests that each time a new skill is learned, such as playing an instrument, speaking a foreign language or even dancing, new pathways are formed and areas of the brain may grow, even well into the later years. Physical and mental exercise can alter specific brain regions, improving in cognitive function. Brain growth isn’t just for kids.

2. Once I start experiencing memory loss, it’s all downhill and there’s not much I can do. Actually, there are a number of things you can do to improve your memory throughout life, even if you are already noticing changes. Exercise, challenging mental activities, social engagement and diet adjustments have all been shown to have positive effects on cognition and memory. In fact, a new study published online in May in Alzheimer’s & Dementia: The Journal of the Alzheimer’s Association, showed that healthy people with memory complaints who took algal DHA capsules for six months had almost double the reduction in errors on a test that measures learning and memory performance versus those who took a placebo, a benefit roughly equivalent to having the learning and memory skills of someone three years younger. DHA (or docosahexaenoic acid) is an omega-3 fatty acid and a building block for the brain. Algal DHA products comparable to those used in this study can be found at major retailers like Walmart, CVS and Walgreens under the Algal-900 product name—look for the life’sDHA seal on these supplements to ensure you are getting an algal DHA source. For more information on foods, beverages and supplements that contain algal DHA, visit www.lifesdha.com.

3. Memory problems must mean Alzheimer’s disease. Many people, young or old, worry that mild forgetfulness must be a sign of Alzheimer’s disease. But most people are worrying needlessly—research shows that more than 80 percent of people will never get Alzheimer’s disease. Some experts now believe that it is time to redefine everyone’s understanding of age-related memory loss and dementia. Emerging research indicates that many people experiencing memory loss and dementia actually have mixed pathologies in their brains. In fact, very few senior citizens have “pure Alzheimer’s disease.” Instead, late-life cognitive impairment may in fact be a result of multiple “hits” to the brain, from a variety of risk factors such as hypertension, obesity, sedentary lifestyle, chronic stress, head trauma and poor diet. The good news? There is the opportunity to influence brain health and function by incorporating lifestyle factors like exercise, a healthy diet, stress reduction and intellectual and social engagement. Regardless of family history, the choices a person makes in life may be able to slow the progression of age-related cognitive decline or help prevent it altogether.

4. Brightest equals youngest. Today’s society does place an emphasis on age but, keep in mind, people over 65 rule the country. The majority of legislators, CEOs, doctors, lawyers, judges, economists and CEOs are not in their 30s or 40s, but seasoned veterans who bestow several decades of experience and expertise. Along with gray hairs come both knowledge and wisdom and you do not have to look far to find inspiring stories of accomplishment, creativity and reinvention in the second half of life.

Article source: ARAcontent. To see some inspiring profiles of aging and learn more about the actions you can take to ensure that you build and maintain a mind that is healthy and beautiful for an entire lifetime, visit BeautifulMinds.com.