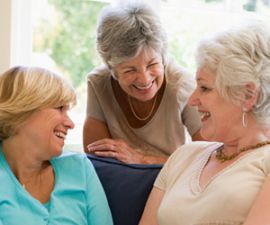 Although "Live Long and Prosper" is actually an abbreviated version of a blessing, most of us recognize it as Mr. Spock's greeting on "Star Trek." But, back here on earth, and in retirement, there really are two secrets to living longer and healthier: strong social support and an optimistic outlook on life. Today, I'm going to share three scientific studies with you about longevity and better health:

The 22 percent effect.
Lynn Giles and three other researchers followed 1,500 older people for 10 years, and found that those with an extensive social network outlived those lacking social support by 22 percent. Interestingly, it was friends and not relatives that had this effect (not to say relatives aren't important; they just weren't a factor in increasing longevity in this study). The effect of friends increasing life span persisted, even when those in the study experienced huge changes such as the death of family members or a spouse. (Source: Journal of Epidemiology and Community Health.)

The two and a half year effect.
Another 13-year study, involving 2,812 men and women in New Haven, Connecticut, 65 years of age and older, investigated the relationship between social activity and longevity. It found that men and women who were socially active lived an average of two and a half years longer than those who were not socially active. This study is important because it links a longer life span to activities such as playing cards, eating out, or going to movies with others, without regard to physical exercise. It had been widely thought that activity prolonged life because of the physical aspect; now we know that social engagement alone can increase the life span. (That doesn't mean you can retire to the couch, though!) (Source: American Journal of Epidemiology.)

The power of positive thinking.
A third study examined the relationship between positive thinking and the risk of frailty. The researchers followed 1,558 older adults for seven years and compared frailty (determined by speed of walking, strength of grip, weight loss, and fatigue) and measured positive thinking by asking participants how many particular positive thoughts they had over the course of the study (such as "I felt hopeful about the future"). As a group, frailty increased among the aging adults, but those with positive emotions/thinking were less likely to become frail. Talk about the power of positive thinking! Why does it work? A few possibilities have been proposed: positive emotions may directly influence body chemicals in a way that affects health, positive people tend to have increased social interactions, which may result in more access to resources, and optimistic people may be better at coping with and addressing problems. (Source: Psychology and Aging.)

So, there you have it. "Live long and prosper" can be more than just a Vulcan way of saying hello on TV show—it can be reality.