Let In The Light

Getting enough light, at the right time, can be good for what ails you. 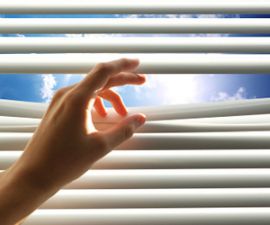 In a world of increasing pharmaceutical prices, some drugs are cheap. One is light. Whether in the form of sunlight or artificial light, light can treat a large variety of diseases.

It’s been known for over a decade, particularly through the work of Dr. Sonia Ancoli-Israel of the University of California, San Diego, that light can treat behavioral problems of Alzheimer’s disease. A group of Dutch researchers recently received much attention when they put bright lights in the homes of Alzheimer’s patients, then left them on from 9 a.m. to 6 p.m.

The overall improvement seen was as high as with drugs or other therapies, and incurred minimal side effects. Adding light kept people out of nursing homes an extra six months.

Is it cost effective? Electricity is increasingly expensive, and lights add heat. Still, these costs are far less than drug therapy, particularly when considering the high price of adverse effects. In a straitened economy, few families can afford well equipped nursing homes. And in where I write this in southwest Florida, sunlight is cheap.

You might expect Vietnam War veterans suffering from combined Post traumatic stress disorder, major depression, and insomnia to be a difficult group to treat, and you would be right. Psychologist Patricia Haynes at the Veteran's Administration hospital in Tucson decided to do something a little different in treating them.

Cognitive behavioral therapy has long been used for PTSD with some success. What Dr. Haynes did was to combine CBT with light, exercise, and “social rhythm” therapy.

Patients went to group therapy for twelve weeks. Trying to reset their days, Haynes asked patients to set regular times for exercise, especially in light. People were told to attempt a morning walk, and to try and make the rest of their days have regular patterns of moving, eating, and resting.

Survival of the Healthy Elderly

One study performed at the University of Pennsylvania looked at the survival of healthy, elderly men living in congregate living. The young researcher reporting the study during the recent Sleep Medicine meetings in Baltimore probed their lives with actigraphy, an increasingly popular and powerful method for studying activity and rest.

Actigraphs look like wristwatches. They contain tiny accelerometers, which allow you with great sensitivity to tell whether someone is moving or a rest. With improving technology, including light receptors, actigraphs now allow you to understand more and more about people’s daily activity in a most unobtrusive way.

The elderly men, who averaged 76 years of age, disappointed the researcher by dying infrequently, “good for them but bad for my research,” as she told the amazed audience. The remark was reminiscent of J.S. Bach’s complaint that a mild winter had robbed him of much desired funeral payments. What was more interesting was that the group’s survival changed simply with a shift in timing. Those whose peak activity occurred a mere fifty two minutes earlier or later than the group average died at a much higher rate.

What does it mean to be a bit more morning or evening like when you’re older? It generally describes circadian rhythms not set as well as they might. The main driver of internal circadian timing is light. Similar effects may explain the improvements brought by light to Alzheimer’s patients.

The “Magic” of Vitamin D

Vitamins are indeed vital, but periodically different vitamins receive mass media note as “supervitamins” that potentially improve survival. It’s been known for years that higher levels of vitamin D appear to protect against a series of different cancers. Now new reports claim that low levels of vitamin D are associated with cardiac disease.

Is vitamin D really the protective factor for preventing tumors and heart disease? Or is vitamin D a marker for the sunlight that people receive?

Dermatologists rightly try to keep people out of the sun. Skin cancer is almost ubiquitous in older Americans, sometimes the result of trying to get a “healthy tan” early in life.

You don’t need much light, however to make vitamin D, especially sunlight on your face, where the vast majority of skin tumors occur. Wearing clothing that covers most of your skin plus a hat can go a long way towards preventing skin tumors. Yet you can still get benefits of light.

For those benefits are many: resetting your internal clocks, changing and improving immunity, preventing tumors, perhaps heart disease. Treating seasonal depression and depression, PTSD, behavioral problems in Alzheimer’s disease, and insomnia are other benefits.

If morning walks can treat diseases as different as post traumatic stress and coronary artery disease, just think what they might do for you.

Dr. Matthew Edlund, M.D., M.O.H., is an internationally recognized expert on rest, sleep, and body clocks. His books include The Body Clock Advantage, Designed to Last, and Psychological Time and Mental Illness. His new book, The Power of Rest, shows that rest is a skill that rebuilds, renews, and rewires mind and body, and can increase productivity, health, and pleasure. For more information, visit his website, TheRestDoctor.com.