Is A Manufactured Home Community Right For You? - Retirement Net by Allen Robie

Home  »  Articles  »  Is A Manufactured Home Community Right For You?

Is A Manufactured Home Community Right For You?

Don’t be put off by erroneous perceptions...these communities have plenty to offer. 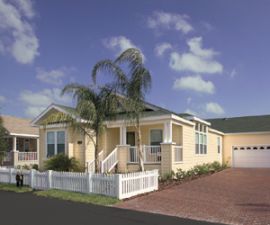 Many men, women, and couples entering retirement find themselves in an unfamiliar situation: downsizing their lives. For those looking into moving to an active retirement community, that usually takes the form of finding a new home that is smaller, easier to maintain, designed to meet their needs, and—perhaps most important—less expensive. And many of those people find themselves in another unfamiliar situation, because a large proportion of retirement communities are based around manufactured homes.

Similarly, manufactured home communities have suffered an undeserved reputation based on conditions common a half a century ago. When it comes to 55+ communities, nothing could be further from the truth: these communities are carefully planned to be at once affordable and enjoyable for the people who buy into them. These ain’t your father’s “mobile home parks.”

The biggest potential disadvantage, though, is that it can be more difficult to get financing for manufactured homes, especially pre-owned ones, and so interest rates can be higher. Even this, though, will be in large part conditioned by your own credit history; and generally speaking retiring couples have less trouble finding a decent mortgage rate than young, first-time home-buyers.

Now: what are the advantages? First and foremost, cost. Manufactured homes tend to cost significantly less than site-built homes—as much as two-thirds less for comparable size and amenities. That’s in large part due to the cost-savings inherent in mass-production—imagine how much a car would cost if a team of builders came to your home and built it in your garage! Yet the factory product is in every way comparable to the custom-built product.

Associated costs also tend to be less. Local property taxes, for instance. Repairs are often less expensive, since there are often manufactured modules than can replace damaged ones, just like changing out parts on a car. This same flexibility allows you to install upgrades in your home at a fraction of the cost of renovations to site-built homes.

There is another factor which is important, but difficult to establish precisely: the “what might have been” factor. Manufactured homes are much less expensive to install; and an entire community of manufactured homes gives a developer more leeway to use his capital in other ways: to provide better infrastructure, such as streets and lighting, or faster Internet service, or a larger community clubhouse with more amenities. Such is not necessarily the case...but it could be, and those who buy into a community of site-built homes should ask themselves what the community might have had if the building costs hadn’t taken up so much of the investment capital. Those buying into a manufactured home community can ask the opposite question: how much more might they enjoy because they bought into a community that made community-wide amenities the priority, rather than expensive luxury homes?