How the Internet Will Change Your Body - Retirement Net by Dr. Matthew Edlund, MD, MOH

Home  »  Articles  »  How the Internet Will Change Your Body

How the Internet Will Change Your Body

Part I of a four-part series 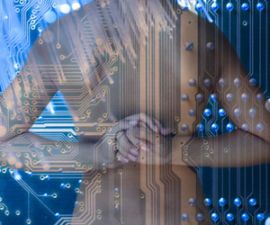 As most of our bodies are replaced in a matter of days to weeks, what we do is what we become. How we live changes not just our gene expression but how we, look, think, and move; it also resets how we rebuild and renew ourselves—critical to our health and survival.

The body always learns and changes as it learns. It’s now clear the Internet changes our brains both anatomically and physiologically. Much has already been written on that subject, particularly Nicholas Carr’s excellent The Shallows.

It’s not a happy picture. Carr argues that the Net brings with it greater distraction, inattentiveness, and less effective long term memory consolidation—with rather nasty effects on creativity and deep thinking. As I’ve argued elsewhere long term memory is our brain savings—what we use to make us us, as well as come up with new ideas.

Yet what is the Net doing to our bodies? Here is a very quick sketch of what is happening and what may happen, itself a small fraction of what’s going on. When it comes to the human body, we often suspect we know more than we do.

One thing getting clearer is that the Net can make us fat.

Several studies show greater Internet use, especially recreational use, is connected to bigger people. Much of the data comes from cross-sectional studies, observing people and use at one point in time.

Researchers don’t like to draw conclusions from cross-sectional studies. You need to watch people over time and see what the variable you’re studying does—or at least, have a hypothesis you can test about what it does.

The best study of this sort is by Berkey et al. published in the Journal of Pediatrics in 2008. The genesis of the study was significant—the people looked at were the daughters of people in the Nurses’ study, one of the longest and most worked through epidemiologic studies in the US. In Berkey’s research, over 5000 girls filled out questionnaires at ages 9-14, and again 5 years later.

The result—those with more recreational use of the Net got fatter. Those who got less sleep did the same, though the Net’s weight effect remained when sleep was controlled as a variable.

However, two major points must be made—most of the kids were overwhelmingly white and middle class; and the study was finished in 2000-2001, before the rise of texting.

If these Internet effects are real, particularly if recreational versus school/work related Net use is not physiologically much different, the rise of texting, now engaged for 2-3 hours a day by many, means we haven’t seen anything yet. Government estimates that diabetes will eventually afflict one in three Americans could turn out to be underestimates.

More time sitting means more time leading to early mortality. In one now frequently quoted study, women who sat more than 6 hours a day showed an increase in mortality of 37%, versus 17% for men. More impressive, even athletic types who ran long distances daily still had increased mortality if they sat a lot.

Yet the effects of Internet use on the body only begin when considering how the Net increases sedentary time. The Internet is changing the way the body uses time itself.

Part II will look at how the Internet will change body clocks, rest, and how the body restores itself.