Sugar, caffeine, and aflotoxins are among the potential health hazards in your kitchen. 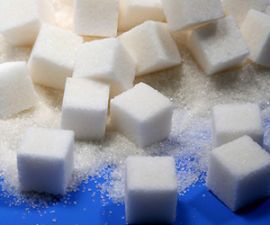 Overweight, stress, and pollution: We have heard of these risk factors for cancers. But others may be in your kitchen.

Sugar significantly adds to the risk of breast cancer. So says Mike Adams in his articles found at NewsTarget.com. "Health Ranger" Mike, as he calls himself, quotes Harvard School of Public Health in his article: "A High-Carbohydrate Diet With Added Sugars Doubles Your Risk of Breast Cancer, Says New Research" posted Friday, August 06, 2004.

The sugar/cancer connection is corroborated by researcher, Wayne Martin, of Fairhope, AL, a 1933 graduate of Purdue University with a degree in chemical engineering whose major emphasis is biochemistry and bacteriology. His articles appear in Townsend Letter for Doctors & Patients and other medical journals. Martin believes that sugar can cause breast cancer just as estrogen does. Sugar substitutes he feels, are no better. Saccharin and cyclamates, both used as artificial sweeteners are linked to greater incidence of bladder cancer.

Two of the most outspoken critics of sugar are Patrick Quillin PhD. and Noreen Quillin, authors of Beating Cancer With Nutrition. On page 9, they write, "Cancer is a sugar feeder...You can slow cancer growth by lowering the amount of fuel available to the tumor cells...High blood glucose levels yield many diseases including cancer, heart trouble, hypertension, and yeast infections."

Healthy sweeteners include the herb stevia and vanilla extract. It's best to avoid a sweet tooth altogether by taking Gymnema sylvestre capsules. Smoked, pickled, and salt-cured foods contain several known carcinogenic substances, including nitrosamines and polycucyclic aromatic hydrocarbons, which have been linked to cancer of the stomach and esophagus.

Additionally, potentially cancer-causing substances are produced when meat, chicken, or fish are fried, broiled, or barbecued for a long time at high temperatures. So much for the backyard barbecue!

Caffeine found in coffee, colas, and chocolate, is thought to be a factor for cancer of the lower urinary tract, including the bladder. Studies have found the rates for these cancers to be significantly higher in people who drink more than three cups of coffee a day. It may be the coffee itself and not the caffeine at fault.

Tea is better for weight loss and cancer prevention because it inhibits fat absorption in the gut. Red Bush tea contains a high level of antioxidants and no caffeine. Caffeine damages cellular DNA and decaffeinated coffee often relies on chemicals that resemble pesticides in its manufacture. Coffee, bacon, eggs, toast with jam: Is this starting to sound like the typical American breakfast? If so, we push the scales closer to overweight and cancer every morning. What's a girl to do? Have corn flakes and milk?

Aflatoxins, (a mold) sometimes found in milk, cereals, peanuts, and corn, have been linked to liver, stomach, and kidney cancer. What are aflatoxins? They are a deadly form of common fungal toxin (mycotoxin), common contaminants of animal feed and human food; they grow on spoiling food. Not all are carcinogenic. Some just provoke allergies. But aflatoxins, the little devils, can mix up DNA causing unscheduled DNA synthesis and chromosomal strand breaks. It is not surprising that aflatoxin has been found in human liver and breast cancer cells. Wasn't the old saying, "You are what you eat?" It should be: "You are what is eating you."