Hey Guys, Are You Depressed and Don’t Know It? - Retirement Net by Jed Diamond, PhD, LCSW

Hey Guys, Are You Depressed and Don’t Know It?

Depression takes different forms in men than in women, and is more common than you may think 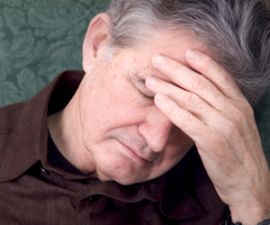 My wife, Carlin, and I walked tentatively into the nicely restored old building to attend the “family weekend.” Our son had been in treatment for a drug problem and we were there to learn and offer support. As part of the weekend experience, all the family members were given various questionnaires to fill out. One was a depression questionnaire. We dutifully filled it out and my wife scored “high” while I scored “low.” Carlin talked to a counselor who suggested that she might want to get evaluated for depression when we returned home.

Driving back we talked and it became clear that Carlin had been feeling depressed for some time. Once home, she saw a doctor, was evaluated, and later put on anti-depressants. Her life and mine changed for the better. It was like she had come out of a fog. Her joy returned and she became much more fun to be around.

A few months into her treatment, Carlin suggested that I might be depressed as well and wanted me to see her doctor. I promptly refused. “I’m not depressed,” I thought out loud. “If I were I’m sure I’d know it. I’m a therapist and I treat depression. I’d certainly recognize it in myself.” She just gave me a gentle smile. “OK, it was just a suggestion,” she said. “Anyway,” I reminded her, “I took the depression quiz at the treatment center and I scored low.” As far as I was concerned the case was close.

However, there were some disturbing thoughts that would pop into my head. My father had suffered from manic-depressive illness all his life and had tried to commit suicide. I knew that the disease ran in families. Though I kept telling myself I was immune (God knows that therapists can be the most pig-headed people when our own mental health is questioned), still there were those doubts. Plus, I found I was often irritable, angry, preoccupied, and withdrawn. But that couldn’t be depression, could it?

I convinced myself that my irritability and anger were justified. “Who wouldn’t be upset with what I have to put up with,” I would call out to anyone who would listen. “I’m stressed out at work, the kids seem to go out of their way to get on my last remaining nerve, and my wife is going through menopause.”

More and more often I found I was having fantasies of running away from it all. I’d see myself getting in my car and just driving into the sunset. Other times I saw myself with another woman, someone who was kinder and gentler and understood me—someone like Carlin used to be. Those thoughts excited and scared me. I knew we couldn’t go on like this, but I had no idea what to do.

Finally, Carlin made the decision for me. “Look,” she told me directly, “we’re both miserable. If our marriage is going to survive, you’ve got to see someone.” Reluctantly, I made an appointment with the doctor she had seen. He did a complete evaluation and I was sure he would say I was a normal guy who had to deal with a lot of stress in his life. Instead, he told me I was suffering from depression and would benefit from treatment. I was shocked. I thanked him and was about to leave when he said something that hit me between the eyes, “You need to be aware, Mr. Diamond, that men often experience depression differently than women, and highly successful and intellectual men, in particular, often deny that they are depressed.”

I didn’t want to believe I was depressed. It just didn’t fit with my view of myself. And it didn’t fit with what I knew were the symptoms of depression. My mood wasn’t depressed most of the time. I hadn’t lost interest in my work or activities I loved. I slept fine and my energy was OK. I didn’t feel worthless and I didn’t think of killing myself.

I did decide to see another doctor. Even though I liked this one much better than the first, she told me essentially the same thing as doctor number one. She also explained that men who are depressed are often hypersensitive, irritable, and angry. She gave me a book to read by a world-renowned psychologist, Kay Redfield Jamison. In her book The Unquiet Mind she described depression in a way that cut to my core. “You’re irritable and paranoid and humorless and lifeless and critical and demanding, and no reassurance is ever enough. You’re frightened, and you’re frightening, and ‘you’re not at all like yourself but will be soon,’ but you know you won’t.”

I could no longer deny the truth. I was dealing with depression. I agreed to begin therapy as well as try medications. I found that my life turned around. I wasn’t so hypersensitive. Little things didn’t bother me as much. I wasn’t so reactive and I felt less irritable. As Carlin described it, “You used to look at me in a way that chilled me. Your eyes were narrow and beady. Now when you look at me I feel your love. It’s wonderful.”

Things have continued to improve for us. I know there are millions of other men out there who are depressed, but don’t know it. I developed a questionnaire that seemed to get at the irritability that is at the core of the kind of depression that many men experience. It will give you a score, let you know the level of irritability and depression you may be experiencing and tell you which of 9 different types are most predominant in your make-up. My hope is that it will allow more men like me to get the help they need.

For more information and to receive a copy of my free e-newsletter, please visit my website at www.MenAlive.com

Jed Diamond is director of MenAlive, a program dedicated to healing men and the women who love them. He is the author of 7 books including Male Menopause and The Irritable Male Syndrome. 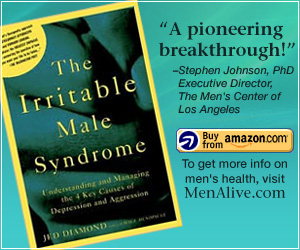