Have You Prepared a Will? - Retirement Net by Ed Slott & Company

Have You Prepared a Will?

And will your IRA be part of it...against your intentions? 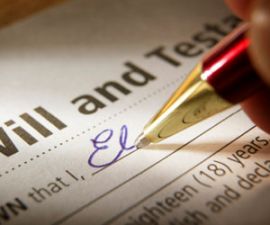 When someone dies without a valid will it is called dying “intestate.” It may interest you to learn that four past presidents of the United States of America died intestate: Abraham Lincoln, Andrew Johnson, Ulysses S. Grant, and James Garfield.

It’s a bit surprising that Abraham Lincoln died intestate, since he was a lawyer by profession and should have known better (although he was a bit occupied with other matters in the few years before he died.) It’s also possible that he and the other chief executives mentioned might have actually had wills, but they were never found. In any event, they all died intestate.

(Speaking of past presidents of the United States, do you know that four are not buried on American soil? They are Jimmy Carter, George H. W. Bush, Bill Clinton, and George W. Bush. Please feel free to use this line on friends at your next cocktail party.)

Getting back to the issue at hand, a will can be written with or without the assistance of an attorney. It can be long or short, depending on the individual’s wishes. The longest will that we know of was admitted to probate on November 7, 1925 and consisted of 95,940 words occupying 1,066 pages bound in four bulky volumes. The smallest will on record was written on the identification disc of a British soldier lost at sea. The complete text consisted of four words: “All to my mother.” It was scratched on the metal in characters so small that a microscope was needed to read the message.

We have written extensively in past articles about naming primary and contingent beneficiaries for your IRA. Your IRA will not pass under your will if you have a beneficiary listed on the designation of beneficiary form. By naming one or more beneficiaries, two major advantages will be gained:

If you do not name a beneficiary, the disposition of your IRA will be governed by either the default provision contained in the IRA agreement, which may not be favorable, or by the laws of the state in which you are making your home at the time of your death. Thus, it is critically important that you review your beneficiary forms often, at least annually or whenever you experience a life-changing event (birth, adoption, death, divorce, separation, etc.) to insure you have the most appropriate beneficiaries. It is also a good idea to verify that your IRA custodian has the most current version of your beneficiary form on file. Either you can decide who gets your assets, or the government can.

Remember, a will is a dead giveaway.