Gardening for Fitness - Retirement Net by 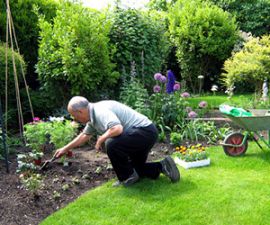 Working in the garden can be an excellent way for seniors to meet the exercise goals set by the Centers for Disease Control and Prevention (CDCP) and the American College of Sports Medicine (ACSM), according to a Kansas State University study.

The 2008 study by Sin-Ae Park, Candice Shoemaker, and Mark Haub of Kansas State University attempted to answer the question: can gardening by itself fulfill the established standard of 30 minutes per day of moderate-intensity physical activity? Researchers measured the heart rate, oxygen intake, and energy expenditure of 14 test subjects—five women and nine men between the ages of 63 and 86. They were watched by trained observers, and kept detailed logs of their activity in order to establish how long they spent performing various typical gardening tasks such as mowing, weeding, and digging.

The conclusion of the study was that gardening can indeed be considered a moderate-intensity physical activity, as defined by the CDCP and ACSM. The test subjects reported spending an average of 33 hours a week working in their gardens in May, and nearly 15 hours a week in June and July—rates that varied from more than 4 times to nearly ten times the recommended minimum for physical exercise. All of the test subjects were reported to be "physically and mentally healthy."

Gardening can be a particularly good form of exercise for seniors because it is also mentally challenging. Seniors typically experience significant declines strength, balance, flexibility, and endurance as they age—all of which can be largely mitigated by regular exercise. The problem is that many effective forms of exercise are boring, leading not only seniors but younger adults as well to exercise less than they should.

But gardening involves a constantly changing round of varying tasks, which change according to seasons, weather, type of plantings and style of gardens. Gardeners must constantly make judgments regarding not just the right thing to do, but the best way to accomplish the work, and remain more engaged in the exercise process than with other forms of exercise.

The same research team followed up last year's study with another which concentrated on specific of health such as bone mineral density, sleep quality, physical fitness, hand strength and psychological well-being. They compared 15 different indicators of health in both seniors who garden and those who don't, and concluded that while some of the results were ambiguous, gardeners tended to have greater overall health and self-esteem than non-gardeners.

In particular, gardeners had noticeably greater hand strength. This prompted the researchers to further explore the effect of gardening on hand strength by analyzing data from an eight-week horticulture therapy program for stroke patients.

According to Dr. Park the patients "did tasks like mixing soil and filling pots. They had to use their hands all of the time, so that was good exercise—and they really enjoyed it."

Dr. Shoemaker, who also researches gardening as a prevention strategy to childhood obesity, said that studying the physical benefits of gardening is important for older adults because gardening is a physically active hobby that provides an alternative to sports or other exercise.

"There's a lot of natural motivation in gardening," Shoemaker said. "For one thing, you know there's a plant you've got to go out and water and weed to keep alive. If we get the message out there that older adults can get health benefits from gardening, they'll realize that they don't have to walk around the mall to get exercise."