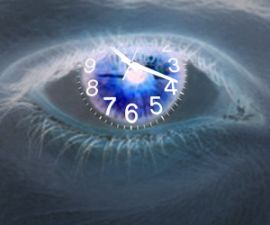 Las Vegas at night cools outside, but not inside. The desiccated desert air does not affect environments designed and run as separate worlds where the temperature, the atmosphere and the staff’s friendly glare never change.

There are no clocks.

Some years ago I returned to Las Vegas after decades to see what time had done. In those years a new fake Venice, false New York, artificial Paris and deliriously faux Luxor rose from the asphalt and sand. Yet the interior of each new world was remarkably similar—pools of light bleeding across acres of high ceilings shading at the corners into darkness, with no inkling of the time or the outside world.

Gambling is timeless, and gambling establishments want you to never know when you will take your plunge. That’s because they want you to take risks—lots of risks.

And deep in the night, you will.

Sure, people who are sleep deprived make bad decisions. That’s been known for thousands of years. Studies done in the last few years on medical interns show their decisions are sometimes literally lethal—particularly when they are chronically and severely sleep deprived. These are national problems, right now, with at least a third of adults reporting less than 7 hours sleep a night.

So what does any casino do? Make sure gamblers get to feeling “lucky” so they can increase their risks. Ply them with free drinks to make their decision making skills worse. Make them not notice the time, so they lose all track of the need for rest and regeneration. Use the “optimistic bias” that may come as a direct result of sleep deprivation to get them to make the really risky bets that will benefit the house.

Las Vegas is the not the only group to notice that people make mistakes at night.

Late night TV is filled with buying opportunities. It’s no surprise. There’s not a lot else that many people think they can do at night.

But people generally make worse decisions in the middle of the night. Insomniacs and shift workers are not at their best. Charismatic pitchmen they might find pathetic at 3 P.M. look impressively appealing at 3 A.M.

Perhaps you know someone with an unused Gimzu knife in their closet?

Though you won’t see them break out their sales with hour by hour profit margins, buying at QVC and the Home Shopping Network is probably very different in the middle of the night.

It’s a lot easier studying people you’ve kept up all night. However, the more common experience for much of the population is slow, long lasting sleep deprivation—a giant national public health experiment that’s been going on at least since World War II. One University of Chicago study showed we’ve lopped off about 90 minutes of sleep over the past 40 years—and that was before the Internet really took off amongst the young.

So far, the data are not complete but push towards the conclusion that partial sleep deprivation also makes for decreased creativity and lesser decision making. Work by Thomas Balkin and his group at Walter Reed Hospital demonstrate some rather striking effects on moral decision making when people are chronically sleep deprived.

And historians would agree. How many believe Lee’s sleep deprivation was a factor in betting the South’s military success on direct assaults at Gettysburg remains debatable. Yet when people don’t sleep well for long periods, as occurs often in wartime, they often make crucial errors.

So what of the New York day traders watching markets across the globe, taking provigil to stay up so they can buy and sell in Hong Kong? The shiftworking firemen called to take out a fire from a nuclear plant? The 19 year old who’s watched movies until 3 A.M. and can’t wait to go out and buy his first car that Saturday morning?

They need to check their mental sharpness. We learn during rest. We retrain and rewire through rest. We perform better at tasks when fully rested and alert—before undertaking them.

Take breaks or you make mistakes—and sometimes the mistakes are big ones.