Fire It Up! - Retirement Net by Leigh Anne Jasheway

Being a short history of man and his grill 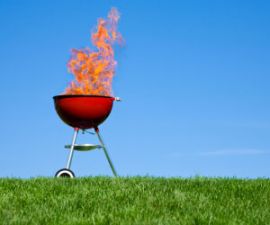 Once upon a time man invented fire. At which point he sat back, admired his handiwork, and wished he had a fermented beverage of some kind so he could celebrate. Instead he ran around to the other caves pounding his chest in a display of manliness and grunting “Og ug ooh! (loosely translated, “I made fire, can power tools be far behind?”). The other cavemen were duly impressed but were not going to admit it. That would be almost as unmanly as reading the instructions on the Cave Art by Numbers Kit they’d just ordered from Sears.

A few decades later when a wooly mammoth happened to trip and fall into the fire pit, man invented barbecue. Now this was really something. No longer stuck with the marathon fire-watching contests they’d been engaged in for years (the winner was usually blinded for days), man could now cook his meals. If only there some kind of fermented grain beverage…

Woman, on the other hand, was skeptical. Somehow she knew this new invention would mean more work for her. She peered out from the warmth of her cave at the men stomping around the barbecue pit, slapping each other’s rear ends, and tossing mammoth bones against the walls of the cave (which she would later have to scrub off before the stain could set in.)

So it began. Men continued to cook outdoors while women begged them to come in out of the elements. “Forsooth my fair knight, cometh inside afore the Bubonic Plague arriveth!” was oft heard during the Middle Ages. And although the history books neglect to mention this, Benjamin Franklin was not trying to discover electricity with the key and the kite, he was just passing the time while his burgers cooked to medium well.

Little by little, however, woman began to appreciate the barbecue too. On the hot days of summer, she didn’t have to heat up the house with the oven. And on the chilly days of winter, she didn’t have to fill the house up with cooking smells because they just ate chips out of a bag; after all man couldn’t be expected to fire up the grill when there was a bowl game on.

Men’s fascination with the barbecue hasn’t waned since those early days. His first grill is a man’s rite of passage. Moving up to a double-burner, stainless steel, remote-started ignition system with built-in bug zapper and videogame system is truly a sign he’s arrived and is a man to be reckoned with in the subdivision. Subdivision man thinks of apartment man grilling his tiny pork chops on a Hibachi on the patio. Subdivision man pounds his chest and laughs. It doesn’t matter if the food is often burnt or otherwise rendered inedible by being impossible to sift out from the coals. What matters is that man gets to play with fire, and perhaps if things get far enough out of hand, play with the siren on the fire trucks that arrive to put out the roaring flames.

Woman cannot be allowed to grill because this sends the wrong message to the herd, the message that barbecuing is really “cooking,” which is something no man will willingly admit to doing. Not even when plied with fermented grain beverages.