Home safety improvements are not as effective, according to a new review 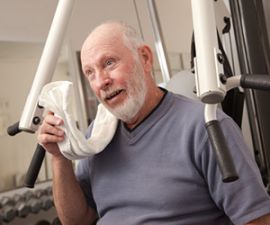 Exercise programs are an effective option for preventing falls among older people living in the community. There is less evidence at present for the effectiveness of other interventions, such as home safety improvements and vitamin D supplements, according to Cochrane Researchers, who carried out a systematic review of the available evidence.

Although few falls result in serious injuries, they may have many additional impacts on an older person's quality of life. For example, after a fall, they may feel less confident and decide to restrict their own activities to avoid further accidents. It is therefore important to consider how falls can be prevented in order to provide peace of mind for those at risk, as well as family members.

Exercise may help to prevent falls by improving strength, flexibility, balance, and endurance. "Programs that contain a combination of these components reduce falls. These include exercising in supervised groups, participating in Tai Chi, and carrying out individually prescribed exercise programs at home," says lead researcher Lesley Gillespie, who is based at Dunedin School of Medicine at the University of Otago in New Zealand. "What remains less clear is whether some other interventions really do reduce falls. Some may be of more benefit to those at higher risk of falling. There also seem to be differences in the effectiveness of some kinds of interventions when carried out in different health care settings."

Those who took part in exercise programs were less likely to suffer a fall and individuals fell less frequently than those who did not. Combination interventions based on individual assessments also reduce falls. There was evidence from single trials that falls are reduced by some other interventions: gradual withdrawal from some types of drugs taken to improve sleep, reduce anxiety and treat depression; bringing forward cataract surgery on the first affected eye, and anti-slip shoes for icy conditions. Vitamin D showed potential for reducing the risk of falls only in those with vitamin D deficiencies. Home interventions were relatively unsuccessful, except in high-risk groups.

A further Cochrane review focusing on prevention of falls among older people living in residential care facilities and hospitals is nearing completion.