Exercise Can Help Protect Against Colon Cancer - Retirement Net by

Though the incidence of colon cancer increases with age, seniors can lower their risk with exercise 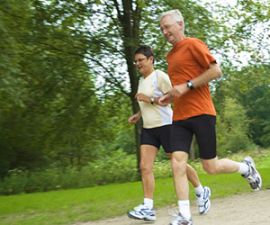 An ambitious new study has added considerable weight to the claim that exercise can lower the risk for colon cancer. Researchers at Washington University School of Medicine in St. Louis and Harvard University combined and analyzed several decades worth of data from past studies on how exercise affects colon cancer risk. They found that people who exercised the most were 24 percent less likely to develop the disease than those who exercised the least.

"What's really compelling is that we see the association between exercise and lower colon cancer risk regardless of how physical activity was measured in the studies," says lead study author Kathleen Y. Wolin, Sc.D., a cancer prevention and control expert with the Siteman Cancer Center at Barnes-Jewish Hospital and Washington University. "That indicates that this is a robust association and gives all the more evidence that physical activity is truly protective against colon cancer."

Colorectal cancer is most common in those over 50, and is the fourth most common type of cancer among seniors in the United States. Each year more than 100,000 people in the United States are diagnosed with colon cancer and about 40,000 are diagnosed with rectal cancer. The study suggests that if the American population became significantly more physically active, up to 24 percent, or more than 24,000, fewer cases of colon cancer would occur each year.

Wolin's report was published Feb. 10, 2009 through advance online publication in the British Journal of Cancer. In the study, she and her colleagues gathered the results from all relevant studies published in English on the effect of physical activity on colon cancer risk.

They eliminated from consideration any studies that combined both colon and rectal cancer because exercise has not been shown to affect rectal cancer risk — including such studies would have led to an underestimation of the effect of exercise on colon cancer risk. In all, they analyzed 52 studies going back as far as 1984, making their analysis the most comprehensive to date.

They found that the protective effect of exercise held for all types of physical activity, whether that activity was recreational, such as jogging, biking or swimming, or job related, such as walking, lifting or digging.

"The beneficial effect of exercise holds across all sorts of activities," says Wolin, also assistant professor of surgery. "And it holds for both men and women. There is an ever-growing body of evidence that the behavior choices we make affect our cancer risk. Physical activity is at the top of the list of ways that you can reduce your risk of colon cancer."

The difference between people who were the most physically active and those who were the least varied from study to study in Wolin's analysis. As an example, in a 2007 study by Wolin and colleagues, women who walked the most realized a 23 percent reduction in their risk of colon cancer. Those highly active women walked briskly for five to six hours each week. By comparison, the women in that study who walked the least walked only a half hour each week.