The modern world has become a potent enemy of rest 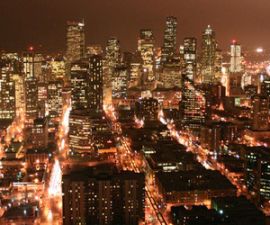 When human evolution and technology collide, billions of us become experimental subjects. The results include new behaviors, new diseases, and new versions of old disorders.

So prepare now for the future—the new world of electronic insomnia.

But first a very short look at the past. In the past nights were really dark. As Bill Bryson points out in his highly pleasant book At Home, even great cities like London were gloomy nighttime caverns until Edison and a host of unsung and generally unremembered scientists came up with functional incandescent lights.

The result was a full, new world—the bright night world of electric light. The human brain and body has not been the same since.

Your Brain On Continuous Light

The spread of electric lights turned people into fully 24 hour creatures. Now we could easily stay up all night—and as industrial firms discovered world wide—work. Some of us wanted to play, too.

Except our bodies never evolved for this change.

Night and day are literally inbuilt into your body—just as they are for every terrestrial life form that ever sees the sun. Time rules life, and body clocks rule time. They are why:

And a few thousand other effects…

According to Eve van Cauter of the University of Chicago, Americans have knocked off 90 minutes of sleep in the past 40 years. Even when people sleep a little less than usual their infection rates go up; their cardiovascular disease rates go up; their rates of depression go up; they get fatter; they can't remember and learn so well.

Human biological imperatives are particularly neglected by adolescents, whose body clocks make them go to bed later, get up later, and require more sleep than adults. Telephones, televisions and walkme cassette players allowed previous generations to sleep less and less each night—and more and more during morning classes. Yet those changes—plus encroaching adolescent obesity and its future budget busting health care costs—may appear incremental compared to what they future will bring.

Except the future arrived some time ago.

We're not cyborgs yet—but many yearn to be. Present day adolescents are now texting about 2 hours a day, and if present surveys are to be believed, are engaged with electronic media 11 hours a day.

And the media are changing.

Now many adults, according to some surveys a majority, are checking emails before they sleep. In some industrial surveys, like that of Travelodge, 25-35% of working adults take calls or texts through the night.

The teenagers are way ahead. Many are texting 50 times a night.

Yet technology moves on. The Dick Tracy communications wristwatch has been a reality for a while, though it is not yet popular. Instead people can surf the net, watch movies, investigate the Cloud, talk, text, sext, listen to French radio, program their television sets and garage doors, pretty much do anything except actively rest—and perform all these actions simultaneously. Faced with a technological future where far more behavior will become monitored and with ever more lifelike electronic entertainments, will rest stand a chance?

The answer is yes—when people recognize that interrupted sleep is ultimately as much fun as coitus interruptus.

Rest is regeneration. Active rest, like physical and spiritual rest, can make life a lot more fun, but passive rest, particularly sleep, is as necessary to life as food. Cut out sleep in any group of animals and they die. Skimp it, and you get sick—with heart disease, low moods and horribly decreased performance.

But at first people will just feel tired and awful and not know why.

The Future of Electronic Insomnia

Electronic insomnia is indeed the wave that will extend far into the future. Kids and adults will do what humans have done throughout the millennia—go to extremes until they can't go any further.

Sleep will be cut back as far as people think they can manage it. Texts and talk, games and entertainments will continue from the day through the night, interrupting sleep dozens of times and preventing many from reaching those deeper stages necessary for memory and learning. As sleep gets crimped expect to see:

A Return to Human Nature

Rest is regeneration. Skimp it and you feel bad and get sick. Use it well and you look good and feel better.

We may soon see a backlash provoking a return to rest.

There are faint stirrings about. School start times are getting later. Some people believe American air traffic controllers should nap on night shift like the rest of the world (despite Transportation Secretary Roy LaHood.) Lots of people are napping on the job—and not getting fired.

Yet the main reason rest may make a comeback is pleasure. When people rest right they feel right. They get more done. They're happier. They look better.

Increased pleasure is one good reason to rest.

There are others of course—like not fighting the whole course of biological evolution. Even fruit flies have something rather akin to human sleep—utilizing the same genes to boot. And there are issues regarding economic productivity, with people getting sufficient rest also getting far more done and costing the health care system a heckuva lot less.

So ask yourself two questions before you go to bed at night: 1. What did my human body evolve for? 2. What can I do to regenerate my body every hour of the day so I can feel and look good?

Then close your eyes.