Or at least, take thought for your ischial tuberosity before you do! 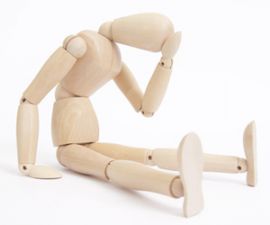 It all started with a pain in my backside, a pain that was caused by...are you ready for this?...sitting. That’s right, I hurt myself sitting. Of all the injuries you can sustain in life, pulling a muscle in your butt from perching on a chair has to rank right up there with the most humiliating. Especially when you have to explain it to a physical therapist who obviously lifts hybrid cars on her lunch break to keep in shape.

It’s nice to have a medical diagnosis for my pain (a pulled ischial tuberosity), but I could have done without our conversation. It went something like this:

Me: “Yeah, I know, I slouch a little when I sit. I’ve been working on it.” (Mostly by visualizing myself sitting straighter, not by actually doing anything about it.)

PT: “Yeah, the way you sit isn’t good. But the way you go from standing to sitting is all wrong. Stand up.”

(I do, with some trepidation.)

PT: “Wow. You don’t stand up correctly either. No wonder your butt hurts. I’m surprised you can walk at all.”

She then proceeded to show me how to sit down. Apparently, I should bend at the hip joint first as if a large man with a black belt in martial arts has just karate chopped me at the pelvis. Then and only then should I lower my butt down to the seat. The same action is supposed to happen when standing up, only in reverse. We practiced this for 10 minutes. Her bill was $300 for an hour, so I spent $50 learning how to sit down and stand up. You’d think that at the ripe age of mumbledy-something, I’d have figured out the basics in life such as sitting, standing, and not paying $300 an hour to have a physical therapist make me feel bad about myself. But noooooo...

Apparently I have a really long learning curve.

After the PT thought I had progressed, I got to demonstrate standing in place for her. Apparently I didn’t have that down either.

PT: “Your right hip is way in front of your left hip. This isn’t good.”

I thought she was going to tell me I should step twice with my right leg for each step on the left just to even up the difference, but instead she dug her thumb into my hip joint so deeply I believe police could identify her from the print she left on my femur. I’m not sure what she was hoping to accomplish—it could have been some form of acupressure or maybe she spotted a spider on me and felt compelled to squish it.

Afterward, I still had a pain in my butt and my right hip hurt too. And I was afraid to either sit or stand, for fear someone would judge me. I began to worry about other basic life skills such as chewing and sleeping too. What if I also did those wrong?

When I got home, I tentatively sat down, using the karate chop image to make sure I did so correctly. To take my mind off the pain, I opened up the newspaper and noticed a story with the headline “Experts Say Sitting Can Kill You.” I jumped up so quickly, I almost gave myself whiplash.

According to the article (which I read standing up while trying to make sure my hips were even), even if you exercise regularly, spending the majority of your day sitting down can lead to obesity, high blood sugar, and higher risk of death. The study didn’t say anything about pulling a muscle. I made a mental note to call the scientists and let them know about their omission.

Needless to say, now I’m really worried. I don’t know how to sit properly and now I find out I should avoid it at all costs. But I also don’t stand properly. As far as I know, the only other body position I’m capable of maintaining for any period of time is lying down. But I can’t imagine being able to write while supine, especially considering the fact that when I lie down for more than a few minutes, both my dogs drape themselves over parts of my body. There are mornings I wake up unable to walk because my legs are both completely asleep from lack of blood flow during the night.

I only have two options, I guess. I can invest $2,000 or more in a treadmill desk because as far as I know my walking is okay as long as I don’t stand still. Ever. Or I could invest in a harness and pulley contraption and spend my days suspended from the ceiling. I remember Dolly Parton, Jane Fonda, and Lily Tomlin kept their boss Dabney Coleman in one of those things in the old movie, 9 to 5. Surely I could hang from the ceiling error-free.

The only problem I have now (besides pain in my rear end, a sore hip, and fear of sitting or standing) is that I’m afraid to Google “leather harness” to see where I can get one. Treadmill desk it is then.