Before you retire, you need these three plans in place. 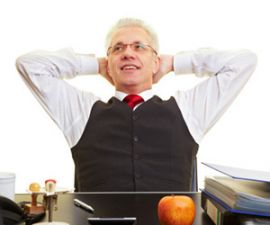 Okay, so you can’t wait to get out of the day-to-day work grind. You’re not alone. A lot of the US working population can’t wait to retire. But before you pocket that gold watch and run gleefully from your work place into the great unknown, make sure you’ve created an infrastructure that will support you in thriving, not merely surviving, this next stage of life.

If you’re planning to start a business, or launch a new career, then no problem. Your goal for what’s next automatically incorporates these three must-needs. If you’re looking forward to no timetables and nothing definite planned, you could be headed for real trouble. You won’t want to leave work without:

1. A Money Plan. Of course, everyone knows this one, so if you’re set, great. Did you know, though, that one of the biggest regrets many women have is around money and retirement? They regret not starting sooner, saving more, and being better informed about finances. Yes, even women with high-powered careers, making buckets of money. Many of these women have hidden their heads in the sand around money and haven’t planned for the future they deserve. It’s not too late to start, so if you’re not set financially, get creative and go for it.

My friend Sarah, divorced in her 50s, had a successful business on the West coast and a very handsome settlement from her ex. She moved to the East coast, started a new business, and ten years later found herself with no retirement and in debt up to her you know what. Did she throw in the towel because it was too late to start? No! She found a terrific financial adviser who helped her create a plan to first erase her debt, and then refocus her business by doing more of what she loves doing. Today in her mid-70s she owns her own apartment in Boston and has accumulated enough wealth to take care of herself for the rest of her life. (Plus: she’s having the time of her life.)

2. A Time Management Plan. Yes, I know one of the lures of retirement is not having to have a schedule. Beware, though, for therein lies one of the biggest traps of retirement. Without a framework for your days, weeks, months and years, you can slip into a deadening non-routine. My client Jessie retired from an executive director position with a national non-profit organization at the age of 63. She didn’t have a plan, but couldn’t wait to dive into the laundry list of projects she’d been wanting to do for years. She cleaned out her basement and garage, fixed everything that needed to be fixed, redecorated a number of rooms in her home, caught up on her reading, created an herb garden, and turned the boxes of photographs in her closet into scrapbooks—all in the first 5 months. By the end of the next 5 months, she found herself taking a whole day to pick up the cleaning and buy a few groceries. Some days she didn’t even get dressed. On one such day, she caught a glimpse of herself in the hall mirror and realized that this was NOT what she had dreamed of in retirement.

Five months seemed to be the major number for Jessie, because after five months of coaching she had identified her top values, uncovered a long-buried dream, and had begun crafting a life that fit her perfectly. While she had given up her dream of becoming an artist in high school, she was finally free to express herself creatively. Now, she spends five mornings a week painting, two afternoons as a docent at the local art museum, and is mounting her first art show. Oddly, Jessie finds that her schedule, rather than confining her, gives her a sense of freedom she didn’t think possible.

3. A Purpose Plan. Admit it. Whether or not your love your career, it’s given you a purpose. A reason to get out of bed each day; a place to be where people are counting on you; a focus for your skills, abilities, and energy. Listen up then. If you can find a purpose for this next stage of your life, one that ignites your passion and literally pulls you out of bed in the morning, you’ll be golden.

Helen’s purpose found her, and while in a million years she would never have guessed her retirement would look like this, she has a purpose that literally lights her up from the inside out. Sixty-eight and never married, she has taken in her late sister’s 13-year-old granddaughter and is bringing everything she has to raising this young woman. Has it been easy? No. Would she trade it for anything? Absolutely not.

Work provides money in the form of income you can count on, time management in the form of a framework for your life, and purpose in the form of getting you out of bed in the morning for something that brings meaning to your life. As you design what’s next for you, make sure you provide each of these for yourself.