Do You Need A Will? - Retirement Net by Ed Slott & Company

Do You Need A Will?

If you own property, the answer is “yes” 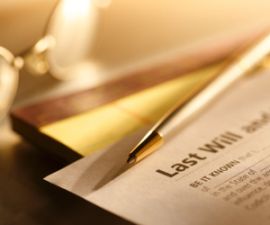 Almost anyone who has reached the age of majority owns some property. If you’re young, that could consist of your car, your checking or savings account, your computer, your cell phone, and your MP3 player. If you’re older, you likely have a more complicated estate. It doesn’t matter if you’re young, old, or in-between: if you own property, you need a will.

Your will can be simple. The two shortest wills on record, Karl Tausch—“all to wife,” and Bimla Rish—“all to son,” are only three words. Or it can be as complicated as you want to make it. The longest will on record was by Fredericka Evelyn Stillwell Cook who died in 1925. It was 1,066 pages and was mostly in her own handwriting.

Many famous Americans have died without a will. Among them are Barry White, Kurt Cobain, Sonny Bono and many others in the entertainment industry. Howard Hughes, Martin Luther King, Jr., and Abraham Lincoln also died with no wills and Lincoln was an attorney!

In many cases these estates were not settled for years due to conflicting claims from wives, ex-wives, girl friends, children, illegitimate children, other family members and creditors. Don’t let that happen to your loved ones. If you don’t have a will, get one. If you have not updated an existing will in several years, review it and change it, if necessary. And don’t try to cut corners or costs here. Simple mistakes in do-it-yourself wills can cost your beneficiaries later. If you have more than a three word will, you should probably consult with an attorney.

Some Interesting Wills in History

In addition to serving as a roadmap for the disposition of a decedent’s assets, a will can also be used as a vehicle to express love or gratitude by giving property of monetary value to specified surviving relatives, friends, or institutions. For instance, actress Marilyn Monroe showed her devotion to her acting teacher, Lee B. Strasberg, by giving him all her tangible personal property and 75% of her estate, to be disposed of as he wished. Famous financier, J. P. Morgan, had several individual bequests in his will and every employee of J. P. Morgan & Co., was reportedly given an extra year’s salary.

Gifts made under a will can be of special sentimental value. Comedian Groucho Marx, who once said that he would not want to belong to any club that would have him as a member, specifically bequeathed his membership in the swanky Hillcrest Country Club in Beverly Hills to his son. Fellow comedian, W. C. Fields, whose death was partly attributable to his excessive drinking, expressly gifted one-third of “my liquor” to each of three of his drinking buddies. William Shakespeare left his wife his second best bed.

Provisions of the will can be random. A Portuguese man picked 70 names out of the phone book and named those individuals as his heirs. In Finland, residents of a nursing home were left shares of stock in a rubber boot company. The rubber boot company later became Nokia and the residents became rich.

Pets can be the beneficiary of wills. Leona Helmsley left $12 million dollars in trust for her dog Trouble. There are now attorneys who specialize in the area of setting up trusts for pets.

It was first said by founding father, Benjamin Franklin, that the only two certainties in life are death and taxes. However, by establishing a good estate plan that includes giving money to charities and charitable foundations, a good portion of the certainty of taxes mentioned by Mr. Franklin can be eliminated.