"Do one thing every day that scares you"

There are a lot of advantages in challenging yourself. 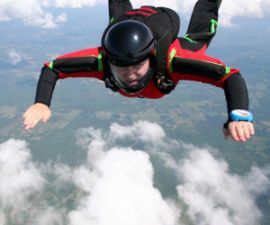 What scares you? Rock climbing? Skydiving? Public speaking? Facing fears can help rev up our lives.

I love the title quote from Eleanor Roosevelt, and decided to make it one of my 2010 Resolutions. Although doing something out of my comfort zone every day is too ambitious for me, I am trying to incorporate that philosophy in little ways. For example:

• Shooting a gun. I’ve never shot a gun in my life, but I made a reservation at a shooting range (through some neighbors) for April. Can’t really see myself aiming at a target and using a pistol, but that’s what I’ll be doing.

• The Tyra Banks Show. I can speak backwards fluently, and I contacted the Tyra Show about my weird ability. In January, I was flown to New York for a taping of the show. I went to the “Green Room,” had my hair and make-up done, but alas, they ran out of time at the taping, and I never did get my 15 minutes (it would have been more like three minutes) of fame. But, I (almost) got on a TV talk show, and did have a fun time with my daughter, who accompanied me. Although I have given a lot of talks about retirement, I had never demonstrated my ability in front of such a large audience, and was quite nervous.

• Travel to India and Nepal. I love to travel, and for my next trip chose places that are exotic, and quite different from most of the places I go (more traditional cities, resort type places...although I did go down the shark slide in Atlantis!).

• Habitat for Humanity. Our community participates in a yearly build, and I usually pick days when we’ll be doing something that I feel somewhat competent doing—moving mulch, painting, etc. This time, though, I signed up for dry wall day—something I know nothing about. (Not to worry—they have paid experts who closely supervise us so we don’t mess up the home for the deserving family!)

• Entertaining. The only things I like to make are reservations—I’m not into cooking, and feel it’s not something I do well. But, I know I need to reciprocate, and so I’ve been inviting people over for dinner. I do worry and stress about it, but have come to realize it’s the social aspect people enjoy, and my real friends aren’t judgmental about my lack of culinary skills. (But, I still stress over it—who am I kidding?)

• Tennis. I’m a 3.5 player, and volunteer to sub on a higher team, one with a 4.0 ranking. Out of my league (figuratively and literally), but the team members appreciate my body on the court if the alternative is forfeiting, and it’s a good thing (I keep telling myself) to play against people who are better than you.

• Cold Calling. To promote my book, The New Retirement, I have increased my cold calling—something I sort of dread doing, but know is necessary.

I realize none of these are earth-shattering, nor are they changing the world, but in the spirit of “The New Retirement” I like to think I’m contributing a little bit to the economy, helping others, revving up my brain and body, and confronting some of my fears.