Depressed? Use a Systems Approach

How to marshall all your weapons in the fight against depression 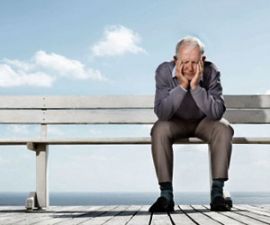 Depression is one version of hell on earth, and Americans have a lot of it. A recent international study run by Evelyn Bromet of 18 countries found America near the top, with 19.2 percent of the population having experienced depression—only France, at 21 percent, ranked higher. With our tottering health care system and vigorous arguments that antidepressants are useless, what are people to do?

Lots. Recognize that a stalled body and a stalled economy have much in common. They can degenerate or reinvent and regenerate themselves to survive and thrive.Depression is a systemic, whole body illness—its causes are multiple, its manifestions endless and its treatment multi-faceted. As Jonathan Himmelhoch and others have argued, depression represents an overall failure of the human body to adapt.

It’s time to adapt a new way of looking at the human body—one that aids us to heal ourselves.

When you’re depressed you can’t think, and you can’t sleep. Your IQ drops, you’re tired in your bones and you become convinced this horror will never leave—and nothing will make it better. No wonder depressives were burned as witches in 17th century England and New England; the transformation of the person is so total only devils could have done the work.

And the causes? More than you can name.

People with pancreatic cancer can become severely depressed months or years before the tumor is found. Hypothyroidism can lead to depression,as can adrenal insufficiency, strokes, heart attacks, rheumatoid arthritis, child abuse, job loss, loss of a loved one, a football player who breaks his leg. The medical causes can fill a textbook, and the social ones can and do break your heart.

It’s no wonder the World Health Organization labels depression as the No. 2 cause of worldwide disability by 2020. But the medical problems alone are legion, as a recent study of depression and strokes demonstrates. From a medical cost standpoint alone, costs are a doubling of mortality and illness in a younger group right in the prime of life. Beyond the increased rates of coronary artery disease, diabetes and osteoporosis, there are changes in systemic inflammation, overall immune response, increased visceral fat, ineffective fibrinolysis. The lack of adaptation inherent in depression causes more than the loss of jobs and the frequent end of marriages; it makes people physically sick just as they lose their hope to get well.

Most of your body is gone in four weeks. Take out bones, teeth, cytoskeletal proteins, and you are newly new—even when depressed. You want to use that capacity for regeneration to get better. And there are more ways to get well than people generally know:

• Light. Dan Kripke and others have long pointed out that light, particularly bright light, like sunlight, can help many people who are depressed—it’s time the media gave that real attention.

• Exercise. Many argue that exercise has a place in all types of depression—not just the mild sort for which studies show it to be effective. All kinds of physical activity can combat the many medical disasters attendant on depression.

• Body Clock.The group at the University of Oregon is treating depression with precisely timed, low doses of melatonin.

• Social support. Depressed people hide, seeking solitude. They tell you they don’t want to be a burden to others—and it only makes things worse.

Social support is one of the most effective actions people can do for those who are depressed—particularly those who think they’ll never get better. And the literature that social support robustly prevents getting depressed goes back to Berkman and Syme and the 1970s. Keep your friends close.

Many depressed people can’t do anything to help themselves. They can’t get out of bed. They have no initiative, no motivation, no energy. So people turn to conventional treatment:

• Drugs. After pharmaceutical companies hijacked academic research and academic psychiatryin the 1980s, it was obvious that antidepressants would be oversold. It also happened from the beginning—researchers recognized early that antidepressants were better anti-anxiety agents than they were anti-depressants, but depression was a much bigger economic and clinical niche. Marcia Angell has recently written an article excoriating antidepressants; Peter Kramer, who knows a thing or two about drug studies, has penned a hearty riposte.

Out of this debate it’s useful to recognize:

• Psychotherapy. It’s been known since the 1960s that cognitive behavioral therapyworks at least as well as most antidepressants alone; interpersonal and other therapies also work well. What’s less well-known is the importance of the alliance between patient and therapist in getting people better. Depressed people can feel completely alone—knowing there’s someone out there fighting with them can and does help immeasurably.

• Cultural and natural treatments. The British take depressed patients out for group walks in parks, where they also clean up the environment. The Dutch put severely depressed people on farms—work for many people is an important part of therapy—even more significant in a time of mass unemployment. James Gordon in Unstuck and others have learned of and devised many international and culturally varied ways of getting people undepressed—ranging from mindful meditation, to dancing, to visualization and spiritual techniques.

The human body learns or it dies. If our immune system can’t learn to adjust to the innumerable mutations of the 100 trillion critters living inside us, we’re toast. Without effective immunity, the bacteria on a single human hand can wipe out all humanity.

Depression represents a global failure of adaptation.The body does not regenerate the way healthy bodies do. But there are many ways to treat this scourge, and to prevent it. And many of these treatments—whether they’re bright light boxes, physical activity or cognitive-behavioral techniques that allow the world to be seen in terms of solutions rather than problems—also promote systemic regeneration.

So when you’re depressed, remember this: almost everybody gets better. And there are many ways—more than we imagine today—to get better. Some involve drugs and therapists, but many engage friends, family, nature, the community, sunlight and walking. And by regenerating people out from the abyss, we can also regenerate their work, their creativity, their homes, families and communities.

There’s a lot more to treating depression than arguing whether drugs or psychotherapy are superior.A systemic illness affecting at least a fifth of the population requires systemic treatments—now.