Converting to a Roth IRA?

Consider the pros and cons carefully, and be aware of the pitfalls. 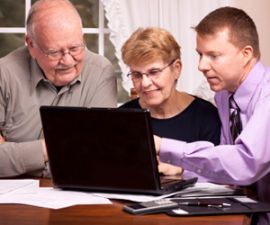 One of the many advantages of converting to a Roth IRA is that there are no mandatory required minimum distributions (RMDs) during the account owner’s lifetime. This could be a very attractive feature for those who do not need their RMDs to support their lifestyles. Leaving this money inside the Roth IRA alleviates the occurrence of a tax bill, provides the opportunity for continued tax-favored investment growth, and will most likely result in future tax-free distributions.

Many high-income retirees had been counting down the days until 2010 when they finally would be eligible to convert to a Roth IRA. The year 2010 truly is historic in this regard, as it marks the first time anyone can convert to a Roth IRA without being hindered by an income or tax filing restriction. Prior to 2010, individuals with modified adjusted gross incomes over $100,000 or those who filed federal income tax returns under the “married, filing separate” category were prevented from converting to a Roth IRA. These shackles have been removed.

One of the most important steps involved in a Roth conversion is the careful deliberation of whether its perceived positive results (i.e. tax-free growth opportunity) will outweigh the negative aspects, such as an immediate or slightly deferred tax bill. Overall, it needs to be determined if the personal, as well as financial, objectives behind why the individual is considering a conversion will be met. In this regard, individuals must be careful not to act too quickly. For example, RMDs have returned in 2010 after having been suspended in 2009. In their haste to act, some IRA owners might jump at the chance to convert their entire account balance in 2010 without realizing that their RMD for the year cannot be converted to a Roth IRA. Individuals age 70½ or older in 2010 must first withdraw their 2010 RMD before they can convert to a Roth IRA. The first dollars distributed from a traditional IRA in a year in which an RMD must be taken are considered payment of such RMD until it is fully satisfied. Once the full RMD for the year is withdrawn, then the remaining IRA balance can be converted.

Mistakenly converting an RMD results in an excess contribution to a Roth IRA, which carries along with it a 6% excise tax penalty for each year the funds remain in the account. The RMD funds withdrawn from the non-Roth IRA can be used to contribute to a Roth IRA, if you otherwise have a like amount of eligible compensation and are able to overcome the income limitations for making such a contribution. That contribution is generally limited to $6,000 if you are age 50 or older, or $5,000 if you’re not. The RMD can also be used as a source to help pay the tax on the conversion of the remainder of the non-Roth IRA(s).

The bottom line here is that similar to any other major financial decision in one’s life, the question of whether to convert to a Roth IRA needs to be measured carefully and with all the facts. Only then can the best course of action be identified and implemented.